Gold prices saw a slight recovery this past week, with XAU/USD rising about one percent. While it was not much, that was the best weekly performance since the middle of June. A combination of a weaker US Dollar and falling Treasury yields likely benefited the anti-fiat yellow metal. Is there more scope here for gold to continue rallying?

To understand the reversal in gold better, you need to investigate what the markets expect the Federal Reserve to do ahead. All eyes are on its next interest rate announcement on Wednesday, where another 75-basis point rate hike is seen. This follows still-high US inflation, with the headline rate running at 9.1% y/y and consistently beating economists’ estimates.

Yet, a more hawkish Fed ought to boost the US Dollar and bond yields, working against gold. That has been the broader story this year, hence the persistent decline in XAU/USD. Global monetary tightening is also working against gold. But, it seems that this past week, the markets focused more on what could happen further down the road.

Expectations of a Fed pivot next year climbed, with markets seeing 2 cuts in 2023. This has been associated with deeper inversion of the yield curve, specifically the 10-year and 2-year rate spread. Meanwhile, economists have been downgrading 2023 real growth expectations. Despite this, near-term breakeven rates have been rising recently, indicating rising inflation expectations.

All this seems to paint a story of the markets seeing the Fed perhaps favoring boosting economic growth despite inflation still being at 40-year highs. Could markets be getting ahead of themselves? Well, we might get a better idea this week with the Fed. If the central bank continues to stand firm on fighting inflation, it seems we could be setting ourselves up for disappointment.

In such an outcome, the US Dollar could rally alongside Treasury yields. That would not bode well for the yellow metal. Outside of the central bank, the first estimate of Q2 US GDP data is also due. 0.4% q/q growth is seen, up from the -1.6% from Q1. However, a negative print would mean 2 consecutive contractions of GDP. That is a commonly cited criteria for the technical definition of a recession.

Then, the week will wrap up with PCE data, which is the Fed’s preferred gauge of inflation. Another strong print could keep the central bank on its toes. As such, it might be too early to call a turnaround in gold. I would go further to say that the risks seem skewed to the downside in the week ahead. As such, it is a bearish fundamental call. 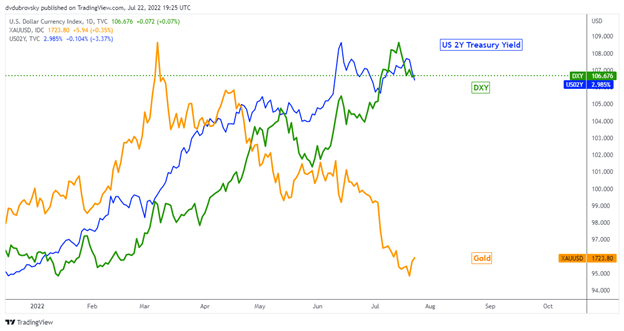