The GBP/USD is recovering from earlier losses as the North American session progresses, even though the market sentiment shifted sour as Fed officials reinforced their “hawkish” message of keeping interest rates higher for longer. Therefore, the GBP/USD is trading at 1.1168, gaining 0.46%, after reaching a daily low of 1.1024.

US equities are trading in the red. On Friday, a slew of Fed officials led by the Fed’s Vice-Chair Lael Brainard crossed the news wires after critical US economic data was released.

The US Department of Commerce revealed that the Federal Reserve preferred inflation measure, the PCE, rose by 0.3% MoM in August, above estimates of 0.1%, while the annual reading decelerated from 6.3% to 6.2%. In the meantime, the so-called Core PCE, which strips volatile items like food and energy, exceeded estimates at 0.6% MoM, while the YoY rose by 4.9%, also above forecasts.

During the day, US central bank policymakers reiterated the need for higher interest rates and emphasized that it would remain more elevated as long as inflation remains above its 2% goal. The Fed’s Vice Chair, Lael Brainard, echoed the aforementioned and reiterated that “it would be premature to pivot” as it’s too soon to declare victory on inflation. Later her colleague Mary Daly of the San Francisco Fed continued with the same “hawkish” rhetoric while adding that the Fed is “resolute” in tackling inflation.

In the meantime, Richmond’s Fed President Thomas Barkin said that he’s “comfortable” with the pace of rates, adding that it’s uncertain how much the Fed will have to do to lower demand to reach its inflation target.

On the Uk side, the British pound has recovered from reaching 1.0300 levels on a YTD low last Friday, courtesy of new Primer Minister Liz Truss’ tax-cutting plans to stimulate the economy. That triggered one of the most volatile sessions, sending the GBP/USD tumbling from daily highs of 1.0900 to 37-year lows of 1.0356.

According to a Reuters poll, ”Nineteen of the 36 economists surveyed said the Bank would add 75 basis points in November while 13 said it would go for a super-sized 100 bps lift. Only three said it would add 50 bps as it did in its last two meetings while one opted for a mega 125 bps increase.”

The GBP/USD fluctuates around the 61.8% Fibonacci retracement, but some 40 pips shy, at 1.1170s, after piercing the 1.1200 figure in the overnight session. Nevertheless, sellers stepped in around the aforementioned 1.1203 daily high and sent the Sterling sliding, towards its daily low, before recovering some ground. It should be noted that the GBP/USD remains downward biased, and unless the exchange rate surpasses the 1.1740 area to shift to a neutral stance, risks are skewed to the downside. 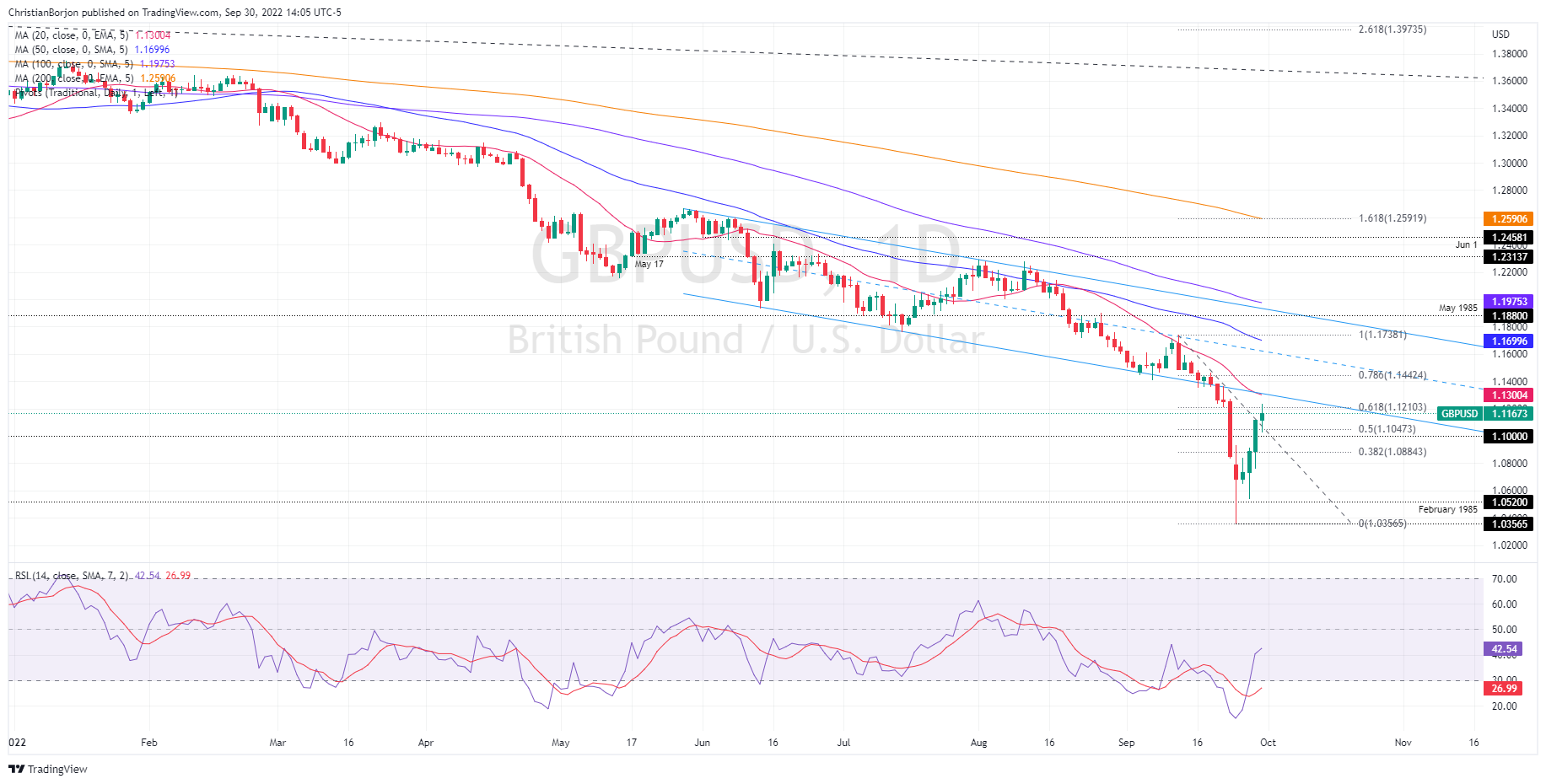