EUR/USD extends the series of higher highs and lows from last week on the back of US Dollar weakness, and the exchange rate may attempt to test the former support zone around the May low (1.0349) as it stages a four-day rally for the first time since March.

EUR/USD appears to be unfazed by the smaller-than-expected decline in the ISM Manufacturing survey as it climbs above last week’s high (1.0258), and the exchange rate may continue to retrace the decline from the July high (1.0485) as it clears the range bound price action from last month.

As a result, EUR/USD may continue to appreciate ahead of the Non-Farm Payrolls (NFP) report on tap for later this week as the threat of a US recession puts pressure on the Federal Reserve to winddown its hiking cycle, and speculation for a looming shift in monetary policy may fuel a larger recovery in the exchange rate as the central bank aims to achieve a ‘soft landing’ for the US economy.

However, another uptick in US employment may provide the Federal Open Market Committee (FOMC) with greater flexibility in carrying out a highly restrictive policy as central bank struggles to curb inflation, and a positive development may influence the near-term outlook for the US Dollar with Chairman Jerome Powell and Co. on track to implement higher interest rates in September.

Until then, EUR/USD may attempt to test the former support zone around the May low (1.0349) as it extends the series of higher highs and lows from last week, but the tilt in retail sentiment looks poised to persist as traders have been net-long the pair for most of the year. 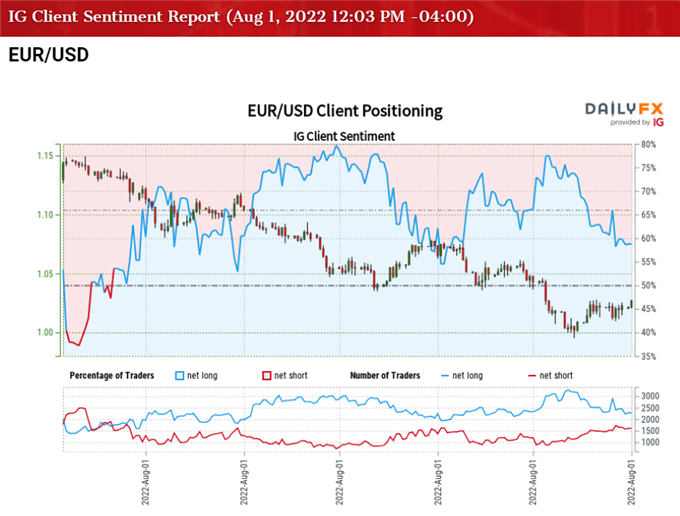 The IG Client Sentiment report shows 56.90% of traders are currently net-long EUR/USD, with the ratio of traders long to short standing at 1.32 to 1.

With that said, EUR/USD may continue to appreciate ahead of the NFP report as it clears last week’s high (1.0258), and the exchange rate may attempt to test the former support zone around the May low (1.0349) as it extends the recent series of higher highs and lows. 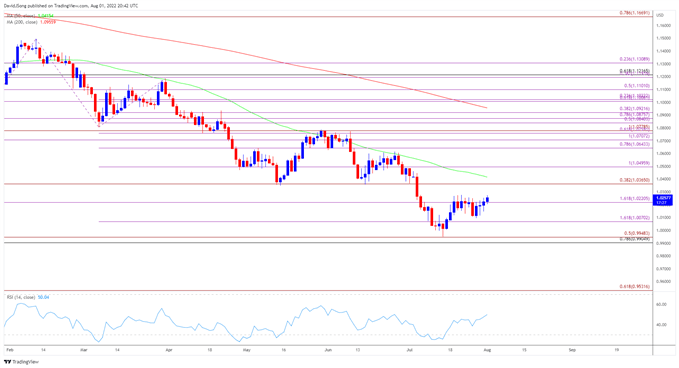