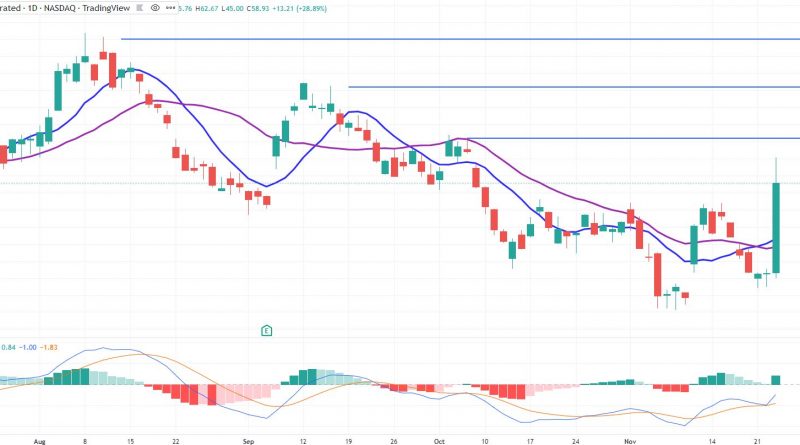 With about 80 software and tech firms in its portfolio, including PowerSchool, Assent and Klarna, Vista Equity Partners is a powerhouse among tech-focused private equity firms. The news added about $1 billion in value to Coupa’s market cap, zooming ahead from $3.5 billion to $4.5 billion. COUP stock closed the trading session at $58.93, up 28.9%.

Neither the Bloomberg or Reuters reporting states what share price range Vista Equity Partners is considering offering for Coupa Software. Despite Wednesday’s thunderous showing, COUP stock remains down 64% year to date. The provider of corporate spending management software topped out at over $377 a share during the height of the pandemic stock bubble in February 2021. Recently, in early November, Coupa traded as low as $40.30 per share.

The reporting thus far suggests that Coupa Software has hired advisers, so a deal with or without Vista may be imminent. Despite the much higher interest rate environment in the back half of 2022 that tends to slow down M&A activity, Vista Equity Partners has bought out two more expensive software companies in just the past few months. The private equity shop run by Robert Smith bought out Alavara for $8.4 billion in August and just last month purchased digital security firm KnowBe4 for $4.6 billion. According to reports, both of those acquisitions were funded with private credit.

Of course, higher interest rates may make an acquisition harder to finance with credit, but they have also made high-growth software companies much cheaper. Coupa Software has been trading below $4 billion over the past month, whereas it was valued at more than $26 billion less than two years ago with rates near zero. For anyone keeping track, that amounts to a near 87% loss of value. No wonder Coupa Software CEO Rob Bernshteyn would be considering a deal.

That a private equity firm would consider taking over Coupa Software is not too surprising. Quite a few analysts have been mentioning this very subject this fall as the COUP share price continued to dwindle. RBC Capital Markets said as much in October. Analyst Rishi Jaluria placed Coupa Software alongside Box (BOX) and Duck Creek Technologies (DCT) as likely candidates for private equity buyouts.

“We would point out […] debt is becoming increasingly difficult to raise (especially at reasonable rates),” Jaluria wrote. “In other words, we believe larger scale debt-financed private equity takeouts could be unlikely in the near-term.”

While cutting his price target from $67 to $55, Bracelin said at the time that “elongated sales cycles”, competition from new entrants like Zip and risks involving refinancing its $2.2 billion in debt, including its convertible bonds, might make an acquisition appealing to insiders.

The market of course needs more color surrounding a possible COUP stock buyout price, but Wednesday’s push toward $59 seems like a good guess. The average Wall Street analyst price target is currently just below $72. Until more news offers up a likely price range, some historical resistance levels may suit bulls as rally targets heading into next week.

First off is $65.50, which worked as stubborn resistance on October 4-6. Then $73 sticks out from mid-September. The $80 level also served to end a rally in early August. Not listed on the daily chart below are the 100-day moving average at $60.50 and the 200-day moving average just above $74.50. Often times longer range moving averages are used to identify fair market values that sellers and buyers can agree on.