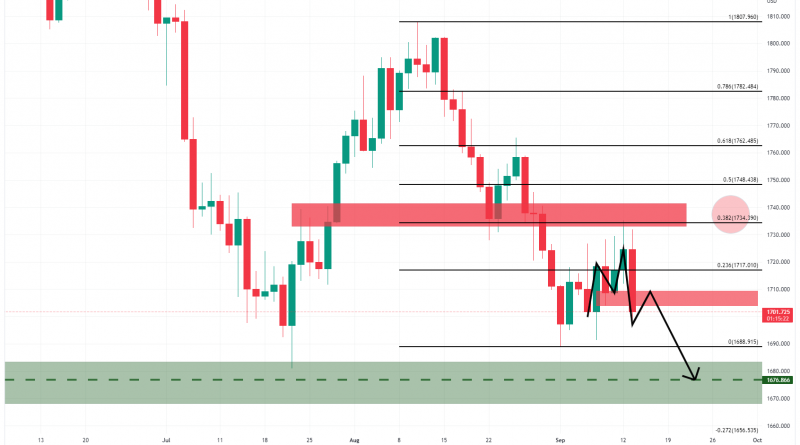 The DXY is an index that measures the greenback vs a basket of currencies and it has been whipsawed over the US inflation data that was released yesterday which sent markets into a state of higher volatility. Gold has responded with two-way price action and continues to be driven on the back of the market’s pricing of the Federal Reserve that meets next week to decide upon its next interest rate hike.

Traders expect 75 basis points when its policy committee meets next week and lower market hopes for a smaller increase. However, there is a one-in-five chance that the Fed will raise rates by a full percentage point, up from zero a day before the inflation report according to FEDWATCH. Inflation in the United States ran at an 8.3% annualized pace in August, ahead of expectations for an 8.0% rise

”Given the persistence of inflation continues to support an aggressive effort by the Fed, we now expect the FOMC to raise the target rate by 75bp at its meeting next week, deliver another 75bp hike in November, and hike a further 50bp in December,” analysts at TD Securities said.

”We also now expect a higher terminal rate range of 4.25-4.50% by year-end. In this context, while prices are certainly weak, precious metals’ price action is still not consistent with their historical performance when hiking cycles enter into a restrictive rates regime. Indeed, gold and silver prices have tended to display a systematic underperformance when markets expect the real level of the Fed funds rate to rise above the neutral rate, as estimated by Laubach-Williams.”

”We expect continued outflows from money managers and ETF holdings to weigh on prices, which will ultimately raise the pressure on a small number of family offices and proprietary trading shops to capitulate on their complacent length in gold.”

In the prior analysis, it was shown that the bulls had been stripped of their moment and the focus was back on the downside while below the neckline of the daily M-formation, as follows: 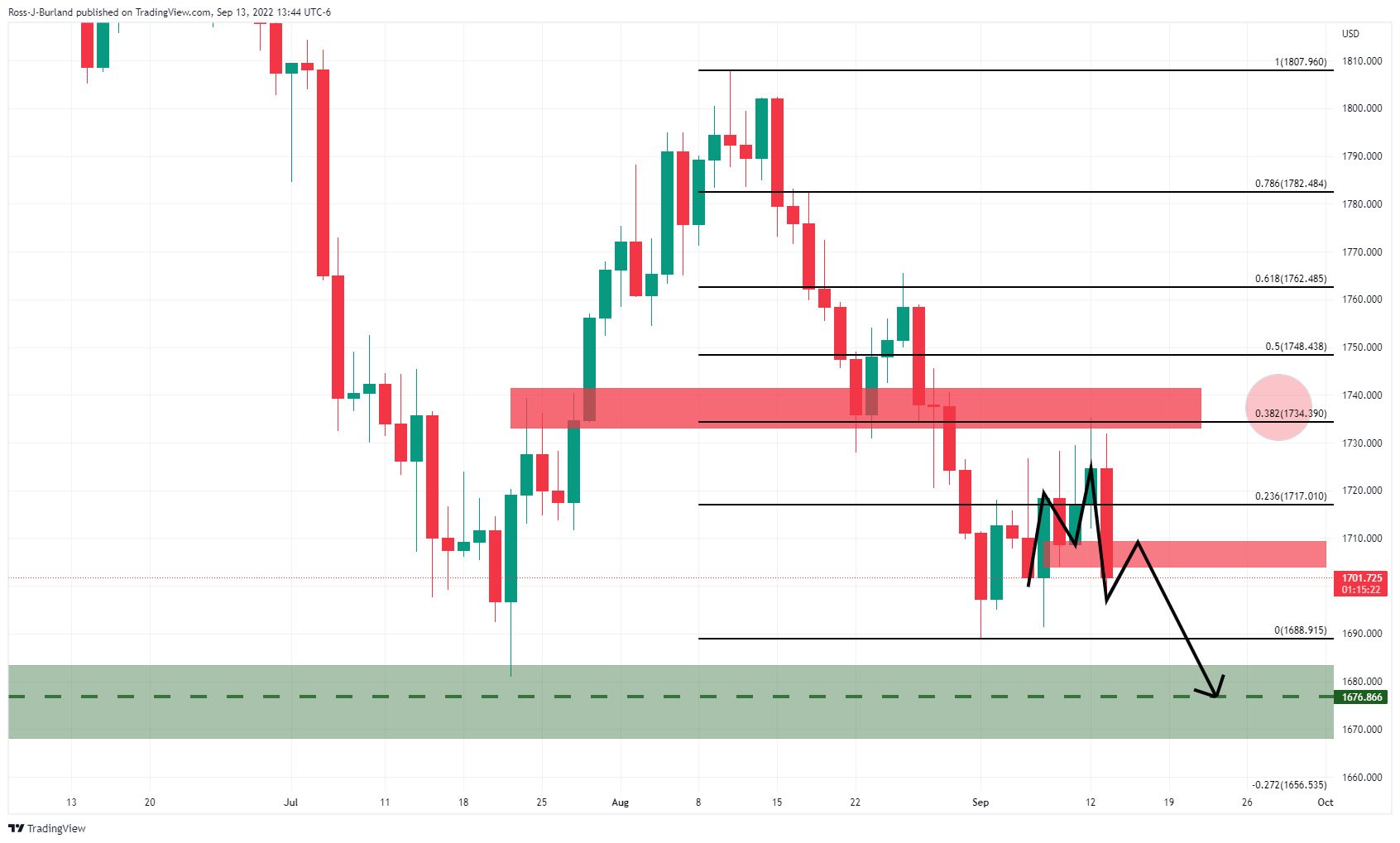 Zooming out, we could see that the downside target had been a key level for a considerable amount of time: 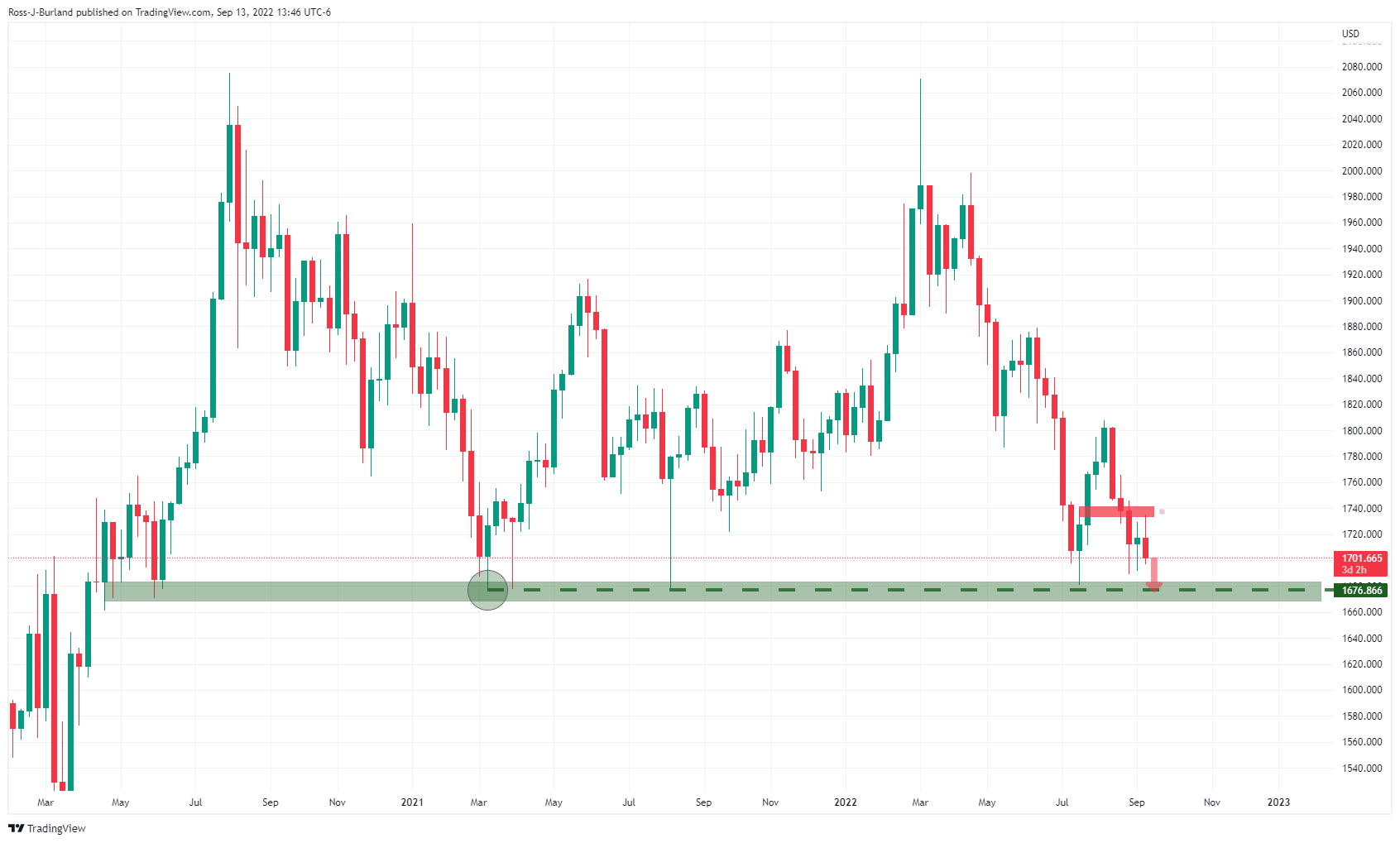 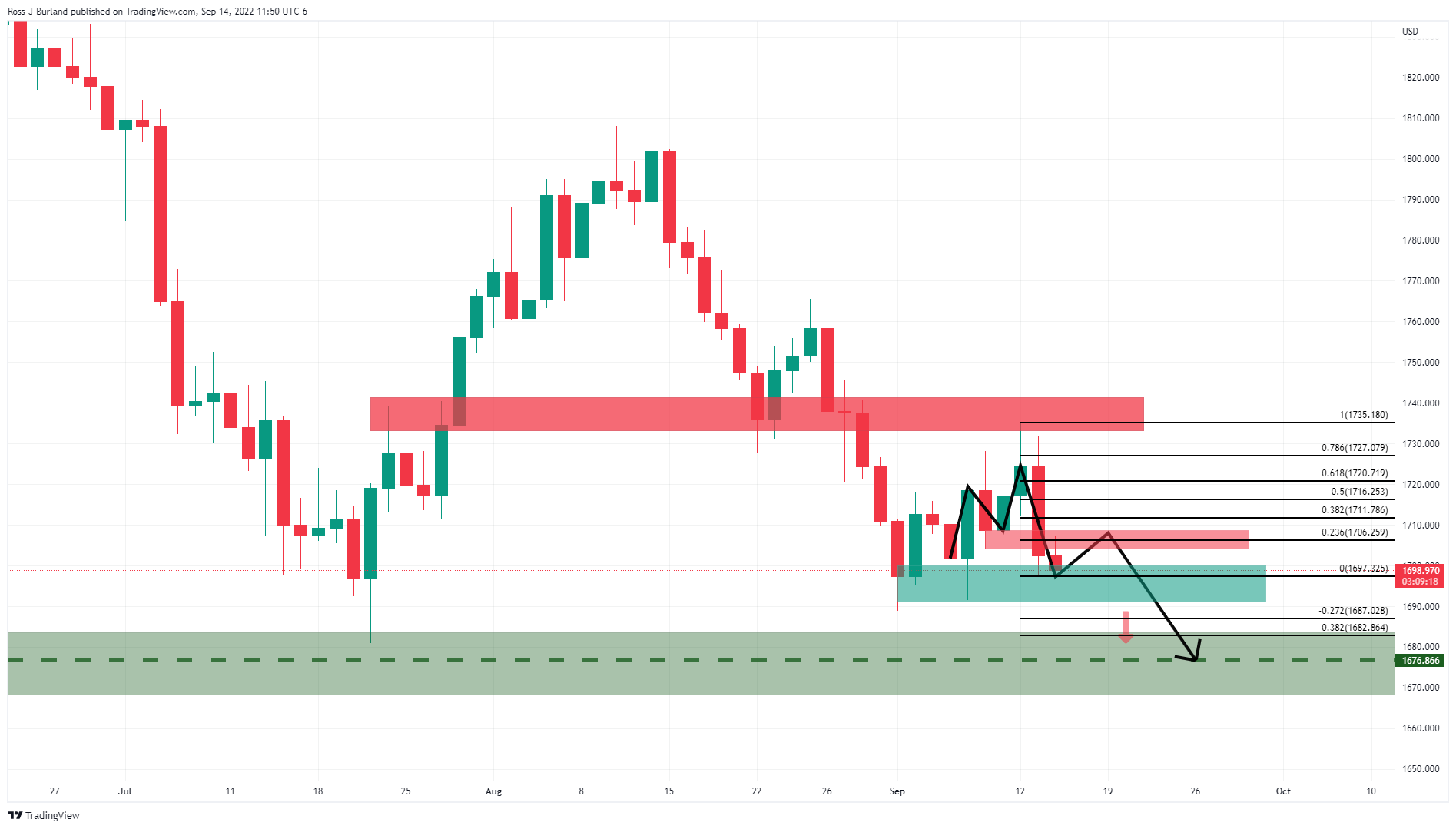 The daily chart shows that the price is extending the downside with the neckline still vulnerable for a restest, however.

From a much lower time frame basis, hourly and 15 minutes, the price action meeting prior lows and a support structure that needs to be taken into account. 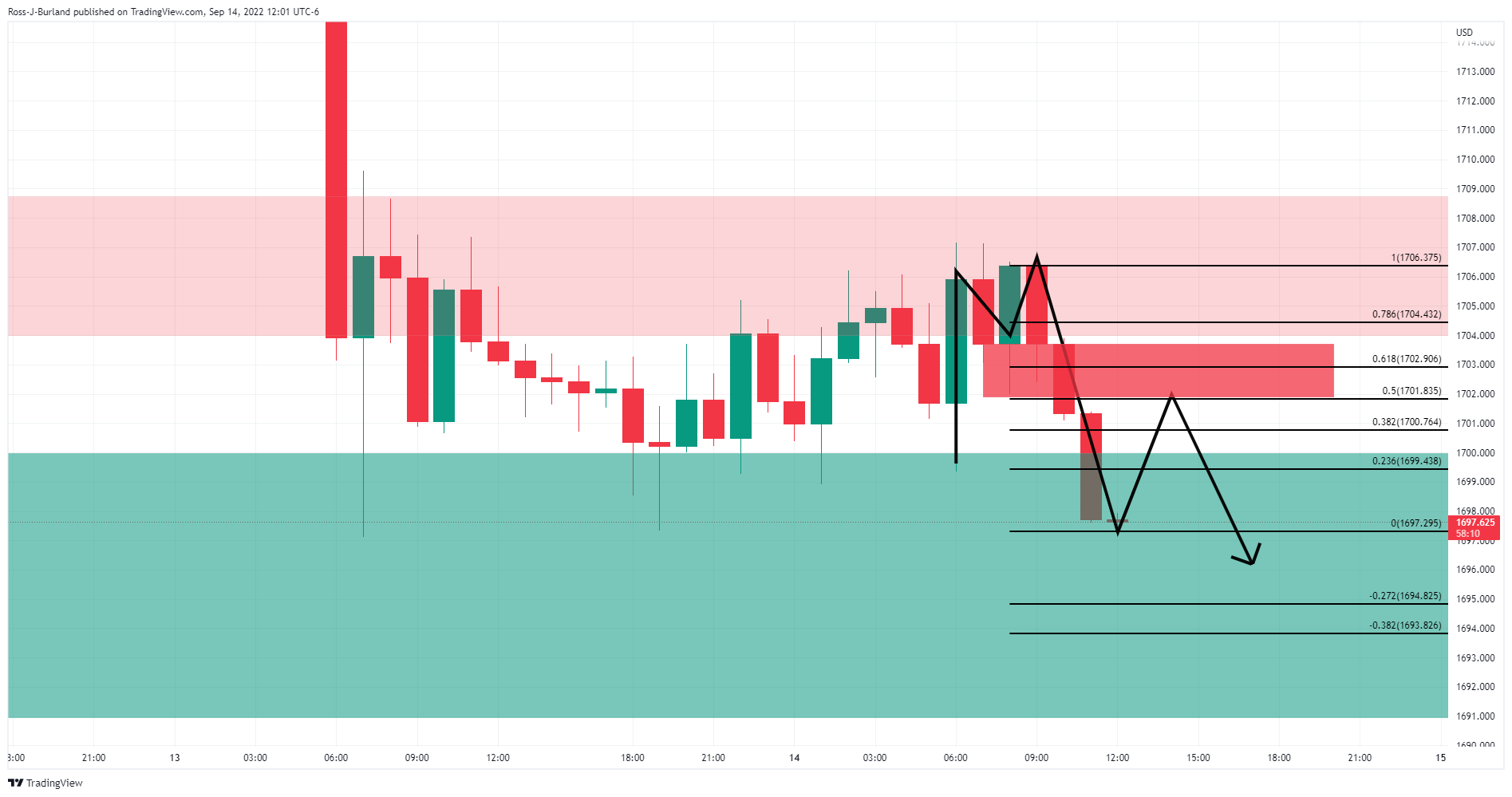 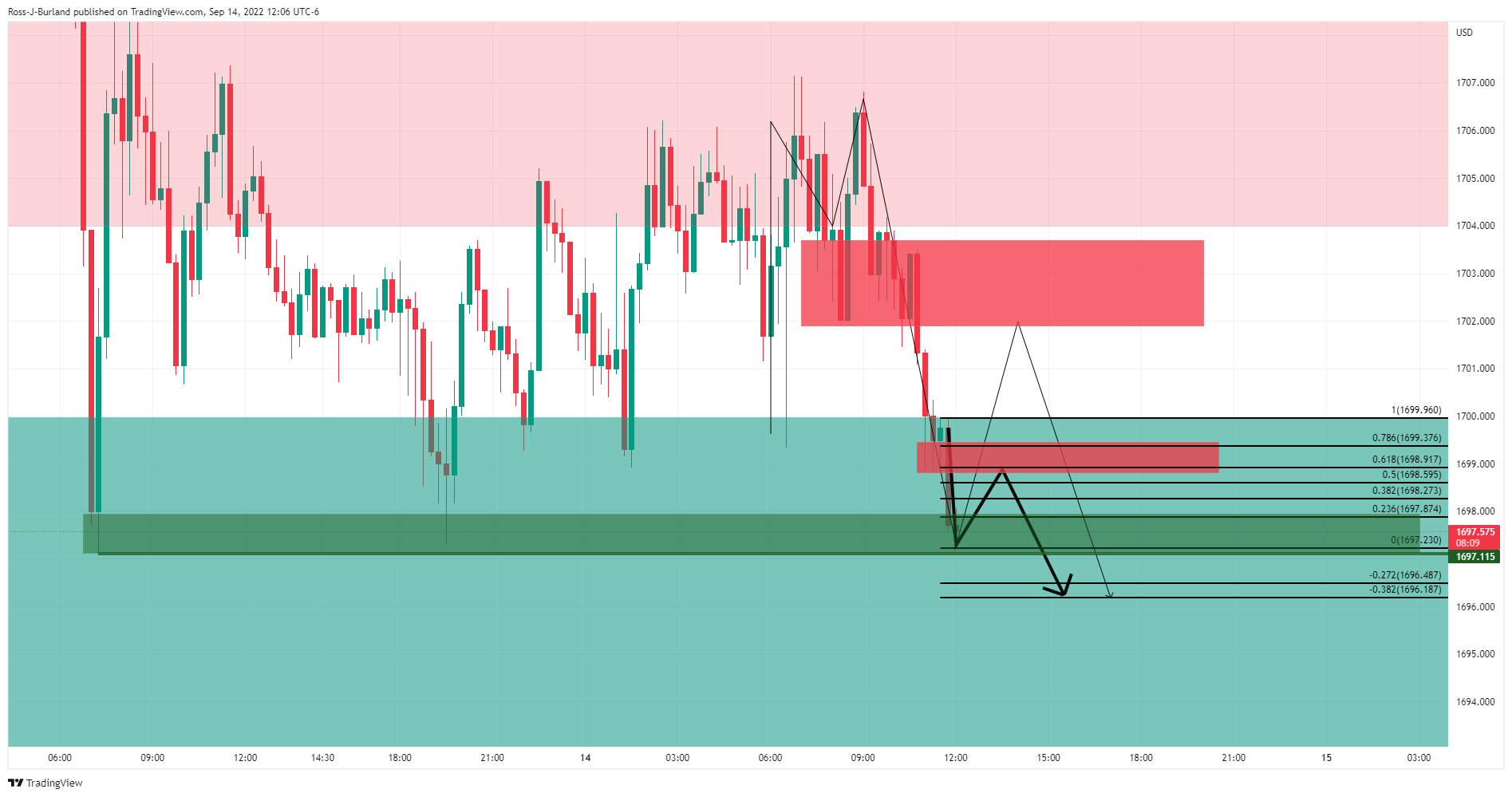