WTI is about to finish Friday’s trading session almost flat, as Wall Street ended the day with hefty gains amidst hopes of a Fed pivot, as wires mentioned Fed officials debating to slow the pace of rate increases following November’s meeting. At the time of writing, WTI is trading at $85.17 a barrel, up by a minimal 0.19%.

Given that the Fed would diminish its aggression, the greenback fell, a tailwind for the US Dollar denominated commodity. US Treasury yields retraced their earlier gains, undermining the buck, which, as shown by its US Dollar Index, fell 0.88%, down at 111.865, after hitting a YTD high of 113.942.

Aside from this, oil prices increased in choppy trading on the likelihood of China’s more robust demand. News that the country might ease quarantine restrictions for visitors abroad from 10 to 7 days spurred a jump in oil prices.

The Organization of Petroleum Exporters Countries (OPEC) and its allies decided to cut oil production amidst the weakened global economic outlook, threatening to tip the largest economies into a recession. OPEC+ drew 2 million barrels daily, in a widely criticized decision by the White House, which reacted negatively to the decision.

Western Texas Intermediate (WTI) recovered some ground during the day and is clinging to the 20-day Exponential Moving Average (EMA) at $85.13 PB as volume dry. In the week, the US crude oil benchmark could not trade above its 50-day EMA at $86.80, meaning that risks remain skewed to the downside. 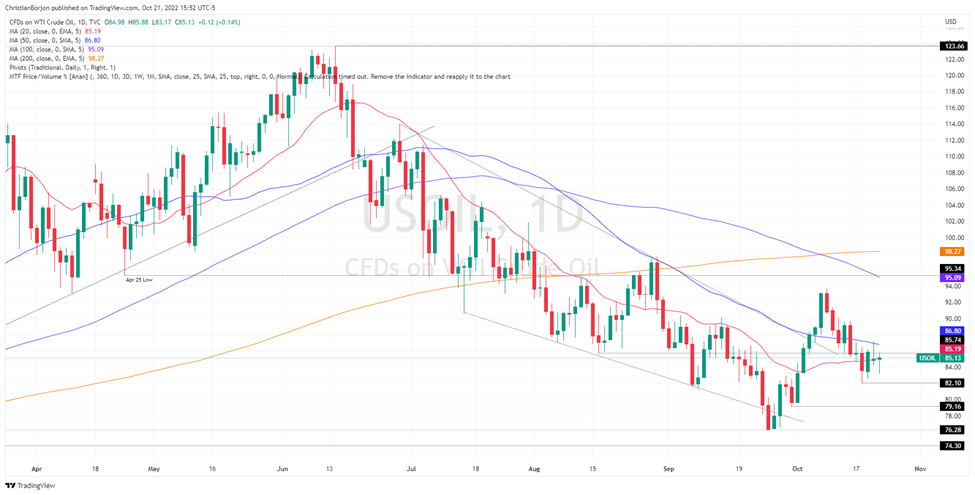