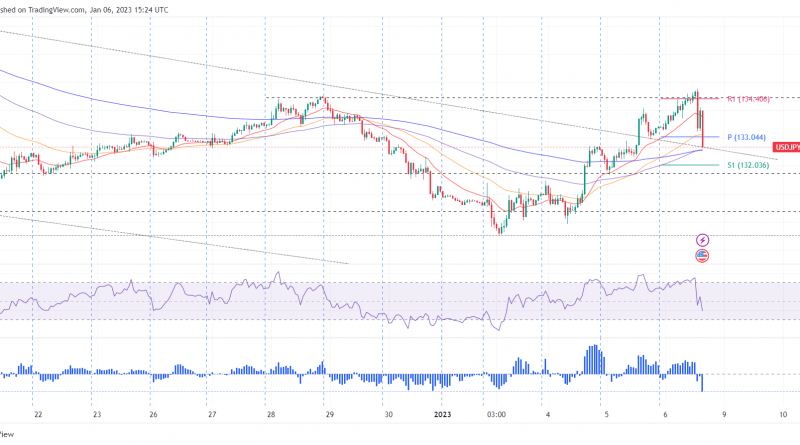 The USD/JPY struggles at the 200-day Exponential Moving Average (EMA) around 134.82, dropping beneath the 134.00 mark, after US economic data, although positive, weighed on the US Dollar, exacerbating a fall of 100 pips in the major. At the time of writing, the USD/JPY is trading at 132.81, below its opening price by 0.44%.

The US Department of Labor revealed that Nonfarm Payrolls in December increased by 223K, above estimates of 200K, data showed on Friday. The Unemployment Rate fell to 3.5% YoY, against estimates of 3.7%, while Average hourly earnings rose 4.6%, below the market consensus of 5.0%, welcomed news for Fed officials, who see wage pressures as a hurdle to tackle inflation.

Meanwhile, US Treasury bond yields edged lower by nine bps, down at 3.625%, a headwind for the USD/JPY, which is diving from daily highs reached at 134.77.

Of late, Atlanta’s Fed President Raphael Bostic is crossing newswires. He said that December’s labor market data does not change his outlook on the economy, adding that the Fed needs to stay the course as inflation remains too high. Bostic’s base case for the Federal Funds rate (FFR) is to hit the 5.00-5.25% range, and to stay at that level, well into 2024.

In the short term, the USD/JPY hourly chart flashes the US Dollar continues to weaken, extending its gains beneath the daily pivot point at 133.04. On its way down, the USD/JPY cleared the 20 and 50-EMAs, though a downslope trendline and the confluence of the 100 and 200-EMAs around 132.55/57 might stall the fall, shy of the S1 daily pivot at 132.03. On the flip side, if the USD/JPY reclaims 133.00, that could open the door for a resumption of the uptrend, exposing resistance levels like the 134.00 mark, followed by the R1 daily pivot point at 134.45.