A rising US Dollar poses a headwind to Asia-Pacific markets after the Federal Open Market Committee (FOMC) raised its benchmark rate by 75 basis points in a widely expected move. Chair Jerome Powell gave a slightly hawkish press conference, which increased the odds for a +5% terminal rate by next May. Bond traders hit the sell button, pushing Treasury yields and the US Dollar higher. The high-beta Nasdaq-100 Index (NDX) fell 3.39%.

Covid cases increased in China’s Zhengzhou on Wednesday, which forced local government officials to respond. A lockdown surrounding the Foxconn plant is in place until November 09, according to the city’s WeChat account. That could disrupt Apple’s iPhone production at a critical time ahead of the holiday shopping season. Apple fell 3.73% on Wednesday.

The Chinese Yuan fell around 0.5% against the US Dollar. The People’s Bank of China (PBOC) eased their daily Yuan reference rate for the fourth straight day on Wednesday, suggesting that policymakers may be comfortable with a weaker Yuan. However, that patience may not extend further. The PBOC may set a strong reference rate today, which would indicate some uneasiness with the overnight move.

The Caixin purchasing managers’ index (PMI) for October is due at 01:45 UTC. China’s services sector unexpectedly contracted in October, according to data from the National Bureau of Statistics (NBS). Analysts expect to see more weakness from today’s figure, with the Bloomberg consensus at 49.3. Caixin’s survey focuses on smaller and medium-sized firms compared to the NBS. A weaker-than-expected figure may intensify Yuan selling.

Australia’s September trade balance is another data point that may shift sentiment in today’s session. Analysts expect a slight improvement to the country’s surplus at A$8.75 billion. Iron ore prices fell in September, but coal prices increased. Natural gas prices moved lower during the same time but remained highly elevated on a historical basis. The Australian Dollar fell around 0.7% and 0.2% against the US Dollar and New Zealand Dollar. The Japanese Yen outperformed across the APAC region. Early this morning, Japan warned residents to take cover after a North Korean missile launch. The missile reportedly flew over Japan into the Pacific ocean.

The Chinese Yuan is pushing into October’s upper range after finding support at the 26-day Exponential Moving Average (EMA). A move into fresh highs would put the 161.8% Fibonacci extension at 7.4244 in focus. Such a move would likely break a bearish divergence in the Relative Strength Index (RSI). Alternatively, a pullback to the EMA is on the table as well. 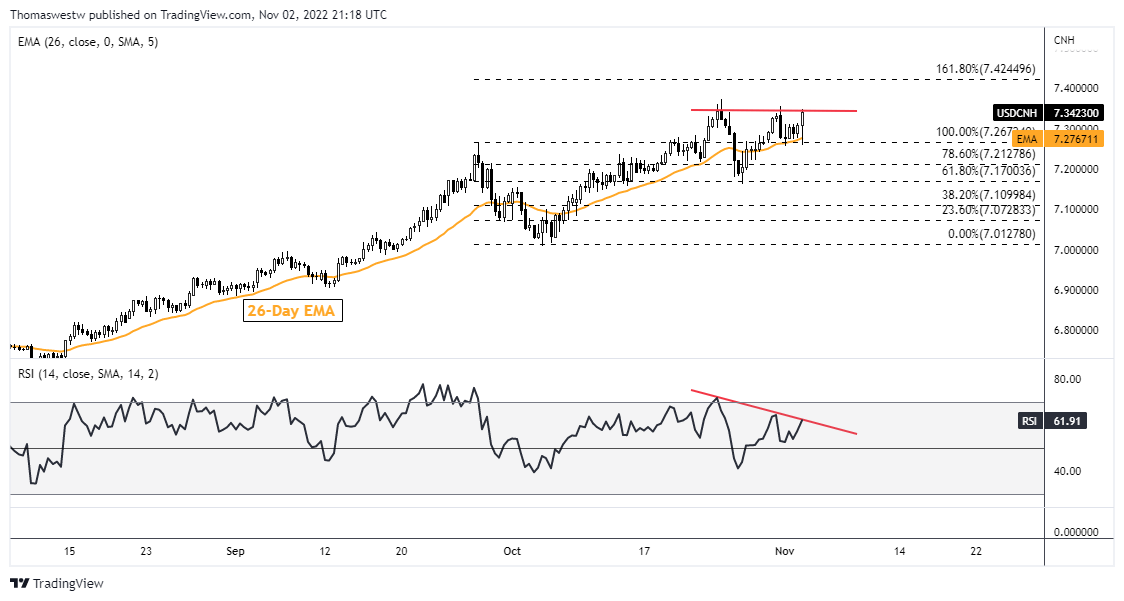