The US Dollar has steadied near record highs in many currency pairs as it appears that the dust has started to settle after last week’s Jackson Hole symposium.

Overnight, Federal Reserve of Minneapolis President Neel Kashkari said that markets misunderstood the Fed’s determination to get inflation back toward 2% after their July Federal Open Market Committee meeting. He said that he was, “happy to see how Chair Powell’s Jackson Hole speech was received.” Stock markets are much lower.

Further Fed tightening will start in September, with an acceleration in the Fed’s balance sheet run off. US$ 90 billion of Treasuries and mortgage-backed securities (MBS) will be allowed to mature and the funds not re-invested each month from Friday.

The Peoples Bank of China (PBOC) fixed the Yuan (CNY) stronger than markets expectations for the fifth day in a row today at 6.8802. The mainland CSI 300 and Hong Kong’s Hang Seng indices are lower, down around -0.90% and -0.50% respectively.

European natural prices have eased after Germany announced that its gas storage filling target of 80% is two months ahead of schedule, with reserves now at 79.4%.

UK Chancellor of the Exchequer Nadhim Zahawi made comments overnight of the need to do more to help households deal with sky rocketing power bills. Sterling continues to languish near two-year lows.

Crude oil found support going into the North American close after Gazprom announced unscheduled maintenance will be carried from Wednesday on the Nord Stream pipeline. It has eased through the Asian session with the WTI futures contract is under US$ 97 bbl while the Brent contract is a touch above US$ 104 bbl.

After European CPI numbers and UK mortgage approvals, the US will see some consumer confidence data.

The US Dollar remains near Monday’s 20-year high as the DXY index is within an ascending trend channel.

The price continues to trade above all short, medium and long-term simple moving average (SMA)that also display positive gradients. This might indicate that bearish momentum may unfold. 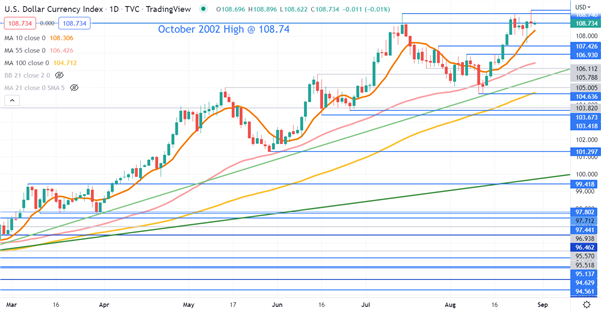