The GBP enjoyed a mixed week, losing ground against the Euro but gaining as the US Dollar finally saw some weakness. Sterling pushed lower earlier in the week following Liz Truss’s appointment as the new Prime Minister before dollar weakness saw a 240-odd pip rally from the week’s lows. The early week’s decline saw Sterling hit a 37-year nadir, trading as low as 1.14080 to the greenback. The rally enjoyed by sterling against the dollar was not replicated against other currencies, indicating the rally was motivated by dollar weakness and not optimism over sterling.

The appointment of PM Truss saw a mix of emotions from markets with the British Pound feeling the effects. Initial scepticism around the appointment stemmed from the idea that the new PM might move against the Bank of England (BOE) as she had voiced strong thoughts regarding the bank’s mandate. Instead the new PM announced a swathe of measures to help consumers with unprecedented energy prices and cost of living increases. PM Truss’s plan will cap the average cost of energy for households at GBP2,500 a year from October, well below the GBP3,548 they would have paid without the intervention. The expectation is that the total cost of this package will result in a decline in inflation however, it will add GBP2.3 trillion in national debt with the budget deficit to surpass 10% of gross domestic product for the third time since the global financial crisis in 2009. 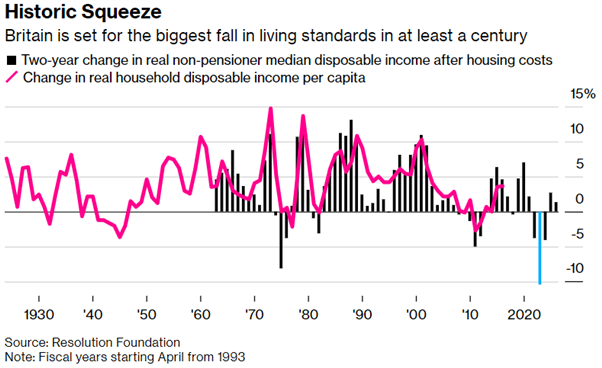 UK Economic Calendar for the Week Ahead

The UK economic calendar is set to enjoy a busy week even though the Bank of England has postponed its meeting for one week. Over the course of the week, there are three ‘high’ rated data releases, while we also have a host of ‘medium’ rated data releases.

Here are the three high ‘rated’ events for the week ahead on the economic calendar:

For all market-moving economic releases and events, see the DailyFX Calendar

GBP has been influenced by broader risk appetite this year. The August rate hike came with a dire set of economic forecasts which have only been compounded by the ECB rate hike this week and the prospect of another jumbo Fed rate hike remaining in play as Fed chair Powell sticks to hishawkish view. The outlook for Sterling doesn’t inspire confidence at present with consensus for lower prices and potentially parity to the dollar still in play.

This week’s GBP/USD rally has pushed the pair back above the key psychological 1.1500 level while still trading below the 20, 50, and 100-SMA. The downward gradient displayed by the SMA’s do not bode well for sterling as we begin the week, yet should we see a positive close on the daily, and a weekly close above the 1.15 level, we could see further upside next week to retest the previous swing low at the 1.1760 area. We have met the fib extension 1.618 level around the 1.1432 level this week and should we take out this week’s lows, we may test the 2.618 fib level around 1.09.

Whether you are a new or experienced trader, we have several resources available to help you; indicators for tracking trader sentiment, quarterly trading forecasts, analytical and educational webinars held daily, trading guides to help you improve trading performance, and one specifically for those who are new to forex.

—– Written by Zain Vawda for DailyFX.com