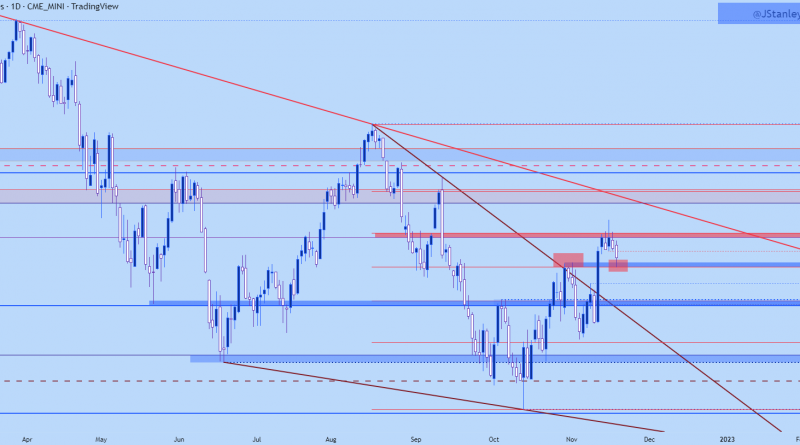 Get Your Free Equities Forecast

US equities started today’s session on their back foot after futures had sold off overnight. By the time equity trading opened in the US at 9:30 AM ET, the S&P 500 had already started to dig into a key support level at 3915, which is the 50% marker of the August-October move. This is the same study from which resistance has shown, as the 61.8% Fibonacci retracement of that move plots at 4012 and along with the 4k psychological level, makes up a resistance zone that’s been in-play all week.

This zone came back into the picture last Friday, as stocks continued their surge after the Thursday CPI release. As I had written in this week’s forecast, this retained bullish breakout potential as it was a higher-high on the heels of the higher-low that had set earlier last week.

There was a bit of breakout at that zone on Tuesday, but that was cut short on news of a missile landing in Poland as a quick shot of risk aversion entered the picture. And even though that was priced-out elsewhere, the S&P 500 has just continued to obediently stick below that resistance zone and that’s led to this morning’s pullback which landed right in a spot of support at prior resistance.

There have been a series of lower-highs develop since that move on Tuesday, and there’s been lower-lows, as well, although it hasn’t quite been even.

This makes for a falling wedge formation with support holding right at that prior spot of resistance that was in-play ahead of the Fed earlier this month. And given OpEx, which can keep volatility rolling through tomorrow’s close, this keeps the door open for a bounce move with focus on a re-test of the 4k zone. The 3960 spot can act as shorter-term resistance as this is an area of prior support that came into play later in today’s session. And if bulls can stretch, there’s a bigger zone of resistance sitting overhead around the 4100 level, as looked at in this week’s technical forecast.

On the underside of price action, if sellers can force a breach of 3915, next support on my chart is around 3867, after which the familiar zone comes back into the picture around the 3802-3820 zone.