The major US indices reversed a portion of early-session losses after the release of FOMC minutes from the July rate decision. The indices still finished in the red after opening the session with weakness. A major driver continues to be recessionary fears, and the meeting minutes highlighted a Federal Reserve that doesn’t look to be near a policy pivot.

The Dow Jones lost 171.69 points and closed 0.50% lower, while the S&P 500 ended with a loss of 0.72%.Nearly every sector in the S&P 500 posted declines, except for Energy, after US government data showed a large drawdown in crude inventories, pushing the price of crude oil higher.

The negative tone in stocks was driven by Target after they missed earnings expectations by a wide margin ahead of the open. And as looked at yesterday, the S&P 500 had just found resistance at the 200 day moving average, which continued to hold through today’s session. On the other hand, there was a more positive tone from Lowes, as they reported profits that outpaced analyst projections.

On the economic front, and in-line with yesterday’s disappointing Housing Starts numbers, mortgage applications for the week ending on August 12th fell to its lowest level in twenty-two years. According to the Mortgage Bankers Association, data showed that both home purchases and refinance applications declined despite a slight decrease in interest rates amid uncertainty surrounding the US economy. The 30-year mortgage stood at 5.45% vs a 5.99% high seen in June, yet data remained dim.

Surprisingly enough, retail sales data added to the debate as to whether the economy is on solid footing. According to the latest release of the US Census Bureau, the pace of the sales at US retailers was unchanged last month. After rising 0.8% in June, retail sales were flat in July amid a drop of auto and gas station sales. However, compared to twelve months ago, overall retail sales rose 10.3% y/y (vs 8.5% in June) as consumers shifted to online spending.

Such mixed data and still-elevated inflation may contribute to the FOMC’s decision to continue raising interest rates (without explicitly hinting a pace) until further signs of easing are visible. The market is currently pricing-in a 59.5% chance of a 50-basis point rate hike in September. 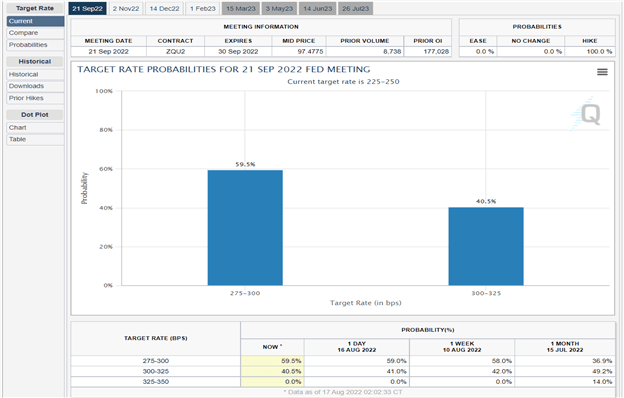