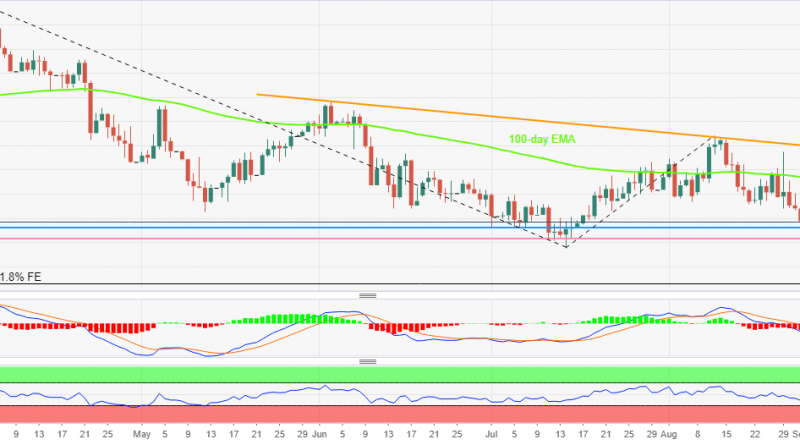 AUD/USD remains on the back foot around 0.6790-85 as traders brace for the US jobs report during early Friday. In doing so, the Aussie pair retreats towards the lowest levels in more than 1.5 months, marked the previous day.

The pair’s weakness could be justified by the bearish MACD signals and downward sloping RSI, as well as sustained trading below the 100-day EMA and the lows marked during late August.

Even so, horizontal supports comprising multiple levels prints during late July, highlight the 0.6760 and the 0.6710 levels as the key supports ahead of directing AUD/USD bears towards the yearly low near 0.6680.

It’s worth noting that the RSI is approaching the oversold territory and hence further downside appears limited. However, a clear break of 0.6680 could roll the ball for the 61.8% Fibonacci Expansion (FE) of April-August moves, near 0.6530.

Alternatively, recovery moves could initially aim for the multiple lows marked in August around 0.6860 and 0.6870 ahead of challenging the 100-day EMA hurdle, close to 0.6970 by the press time.

Following that, the 0.7000 threshold and a downward sloping resistance line from June, surrounding 0.7100, will be in focus.