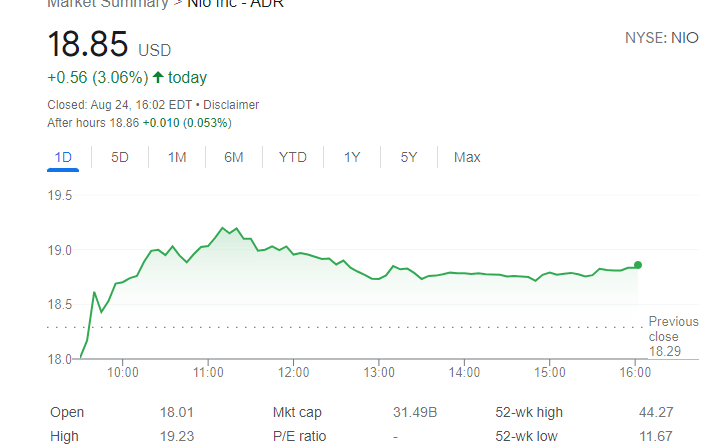 Update: NIO stock benefited from the better performance of Wall Street and recovered modesty on Wednesday. The shares are up 3.06%, changing hands at $18.85. Still, action in stock markets was limited amid cautious traders ahead of the Jackson Hole Economic Symposium. Worldwide economists and policymakers will meet in the US to discuss issues affecting major economies. 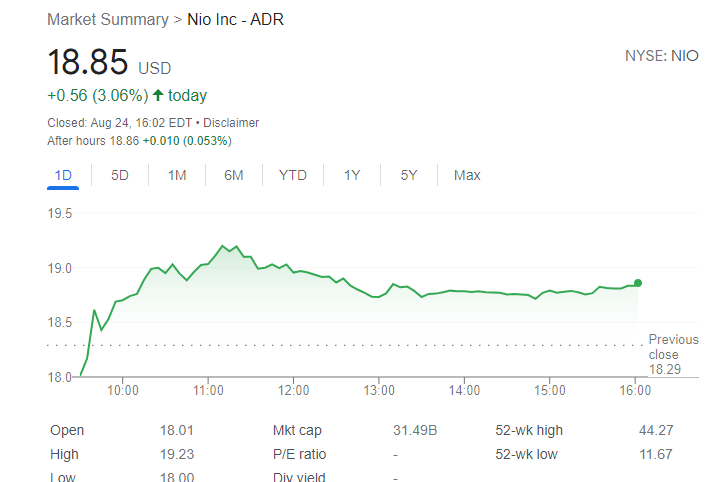 Previous update: Nio stock snapped the previous rebound and resumed its downtrend on Tuesday, plunging 3.48% on the day to settle at $18.29. The sell-off knocked down NIO share price to the lowest levels in two months at $17.75 during one point in Tuesday’s trading. Weak US S&P Global Manufacturing and Services PMIs combined with dismal New Homes Sales data revived recession risks in the world’s largest economy, which triggered the Wall Street sell-off and dragged NIO stock lower alongside. Traders also remained nervous ahead of the Jackson Hole Symposium, where Fed Chair Jerome Powell is expected to reinforce a strong commitment to combat inflation running at a four-decade high.

NYSE: NIO closed out a dismal week of trading as investors remain pessimistic ahead of the company’s quarterly earnings call next week. On Friday, shares of NIO dropped by a further 4.32% and closed the trading session at a price of $19.05. Stocks pulled back on Friday as more hawkish commentary from the Fed led to a sell off that saw all three major indices close lower, snapping the S&P 500’s four-week winning streak. Overall, the Dow Jones lost 292 basis points, the S&P 500 sank by 1.29%, and the NASDAQ tumbled by 2.01% during the session.

Stay up to speed with hot stocks’ news!

Electric vehicle stocks were once again on the decline as more troubling news hit the industry. Rivian (NASDAQ: RIVN) fell by 4.04% after cancelling customer pre-orders of its R1T truck and encouraging them to re-order the more expensive editions of the same vehicle. Other EV stocks fell in sympathy as Lucid (NASDAQ: LCID) and Tesla (NASDAQ: TSLA) both posted losses. Tesla saw some more opposition as noted bear and short seller Scott Burg bought put options on 4.8 million Tesla shares during the second quarter. A Citi analyst also bet against Tesla with an Underperform rating and a price target that is more than 50% lower than Friday’s closing price.

Nio did make one announcement to close the week: it expects to be entering the German market on October 7th. Germany is the biggest market in Europe for the automotive industry so this marks the more important phase of Nio’s global expansion so far. Nio is also looking to move into other European markets this year and has outlined a plan for being in the US by 2025.

Update: Nio stock closed Tuesday in the red at $18.29 per share, losing 3.53% on the day. Wall Street had another tough day, although losses were limited. Nevertheless, the Dow Jones Industrial Average shed 154 points, while the S&P 500 lost 0.22%. The Nasdaq Composite finished the day unchanged. Growth-related figures were discouraging as the S&P Global PMIs indicated a steeper slowdown in August. The Composite PMI plunged to 44.1, its lowest in over two years, reviving recession concerns. Nevertheless, it is worth noting that the picture was similar among most major economies, indicating it is a global issue.

Update: Nio stock shed 1.9% to $18.59 at the start of trading on Tuesday. Most of the negativity is read-across from its competitor XPeng’s Q2 earnings earlier in the day. While XPeng met expectations for revenue, earnings per American depository share came in about 30% lower than expected. Xpeng stock is down more than 7% though mostly because its Q3 guidance was off by a third. The market had been expecting nearly 46,000 deliveries in the current quarter, while management guided for a midpoint at 30,000. As one of Nio’s closest competitors, investors are wondering if this unexpectedly dour guidance will be shared by Nio in its Q2 earnings results that are expected on Thursday.

Like this article? Help us with some feedback by answering this survey: