The S&P 500 is on course to post its largest monthly rise since November 2020, up over 8%. A reminder that within our Q3 equity guide we did highlight that in the top 10 worst H1 performances, Q3 did tend to mark a bounceback on average of over 7%. The best month of which had been for July.

The move has come despite the fact that inflation has not peaked in headline CPI and soft activity survey data has flagged a worrying growth outlook. That being said, Fed Chair Powell’s presser had been interpreted by the market as dovish, after the Fed Chair removed forward guidance and signalled that the Fed would be data dependent. Consequently, with data softening, markets have priced out aggressive rate hikes in favour of a 50bps rise for the September meeting. However, upcoming data in the weeks ahead will ultimately dictate the size of the next rate increase and thus market sensitivity to economic data will increase. As such, traders will be closely watching the upcoming PMI data as well as the latest NFP report. 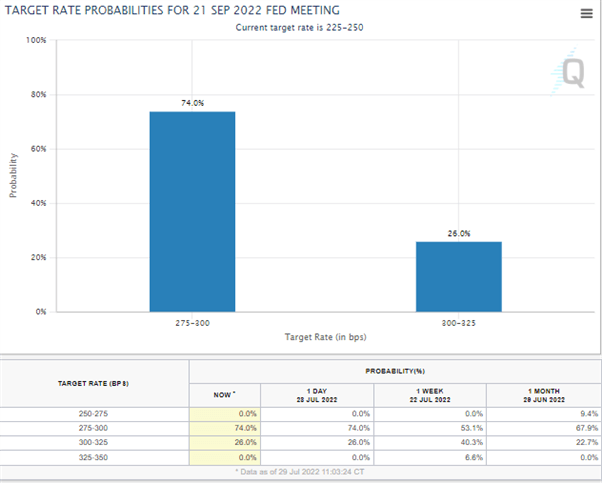 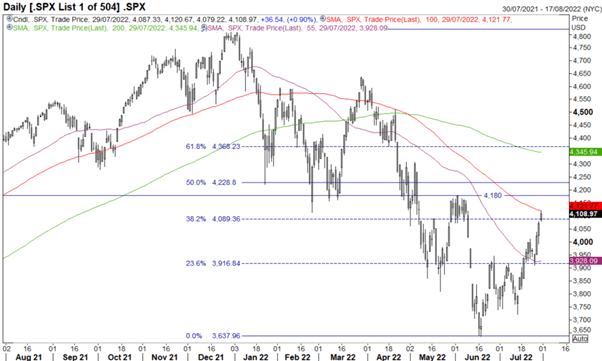 The Bank of England will release their latest monetary policy report, the question heading into the decision is whether they will hike 25bps or 50bps. While money markets are pretty convinced that the move will be 50bps with an 86% probability, economists polled are much more 50/50 on the matter. Consequently, we could be shaping up for yet another hawkish disappointment from the BoE, which would boost the FTSE 100 in such an event. The base case scenario, sticking with a 25bps rate rise.

That said, with the FTSE 100 eclipsing the 100 and 200DMAs, there is little in the way until 7500. However, it is worthwhile noting that we are nearing overbought territory and thus gains from here on in, may begin to slow. 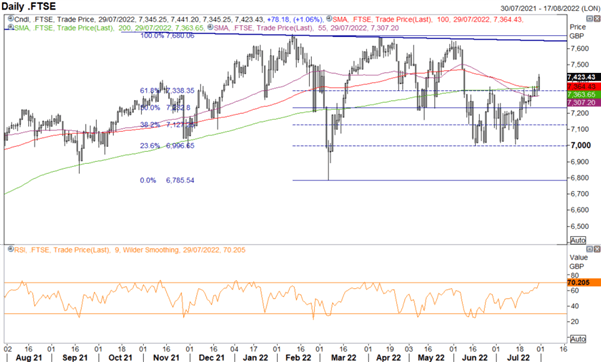 Whether you are a new or experienced trader, we have several resources available to help you; indicators for tracking trader sentiment, quarterly trading forecasts, analytical and educational webinars held daily, trading guides to help you improve trading performance, and one specifically for those who are new to forex.