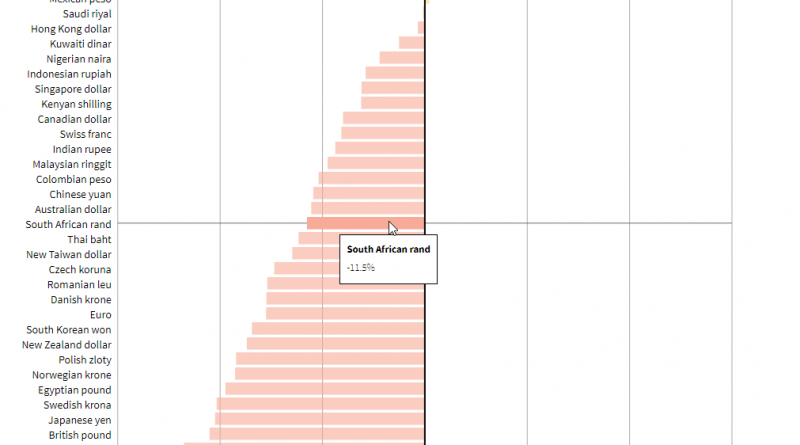 Emerging markets tend to thrive in low interest rate environments and struggle during global rate hiking cycles like the one we are experiencing now but the performance of some of the more recognizable EM currency pairs has differed greatly.

The chart below highlights the performance of EM currencies against the dollar where it is clear to see currencies at the top, middle and bottom of the list of selected currencies. 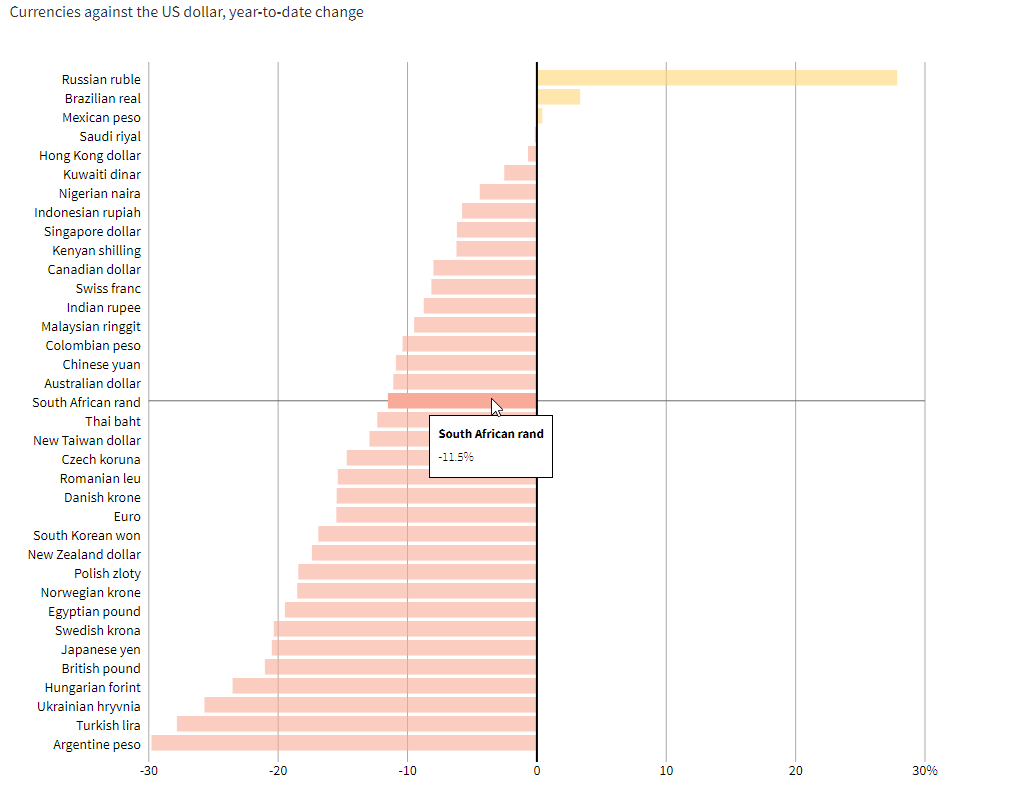 Unsurprisingly, the Turkish Lira has weakened against the high-flying U.S. dollar after Turkish President Erdogan called for rate cuts to support the local economy. Since then, the Turkish central bank has cut rates 6 times, going from 19% in August last year to 12% this month. Emerging market central banks typically attempt to defend the value of the local currency by hiking ahead of major central banks, not by cutting rates.

The daily USD/TRY chart shows the pair climbing steadily to break above the prior spike in Q4 of 2021. 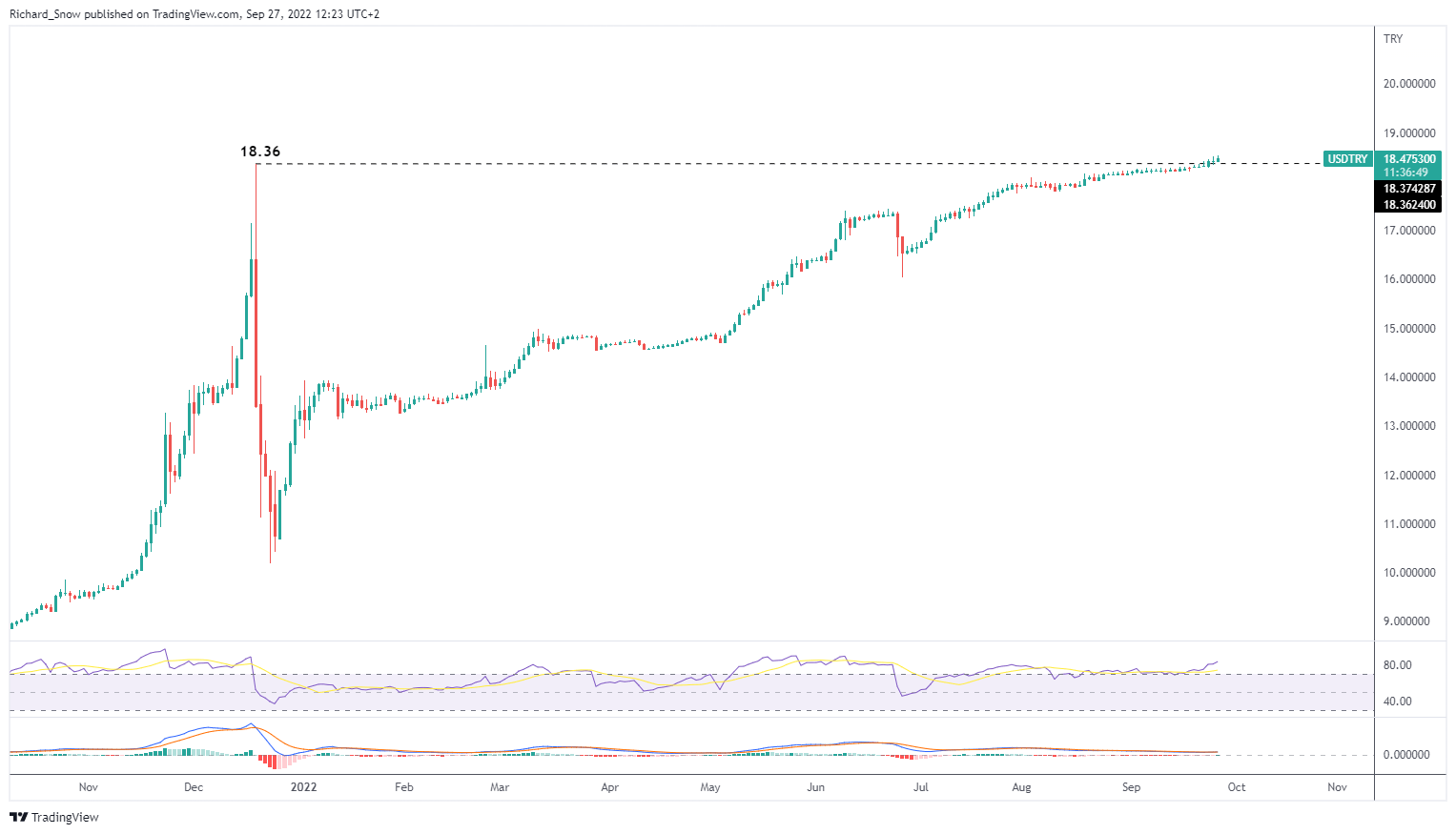 The South African Rand loses ground against the dollar but not for the lack of trying. The South African Reserve Bank voted to hike local rates by 75 basis points last week – keeping pace with the Fed but has to be careful not to hamper growth. The OECD interim report forecasts GDP growth of 1.7% for South Africa in 2022 and 1.1% for 2023. In addition, headline inflation reached 7.6% in August, breaching the Bank’s 3%-6% target.

Further headwinds appear in the latest spate of power cuts known as “load shedding” which has once more had an effect on businesses and consumers. The USD/ZAR chart shows prices continuing to trade within the ascending pitchfork however, today’s slight move lower at overbought levels could be indicative of a temporary pullback. 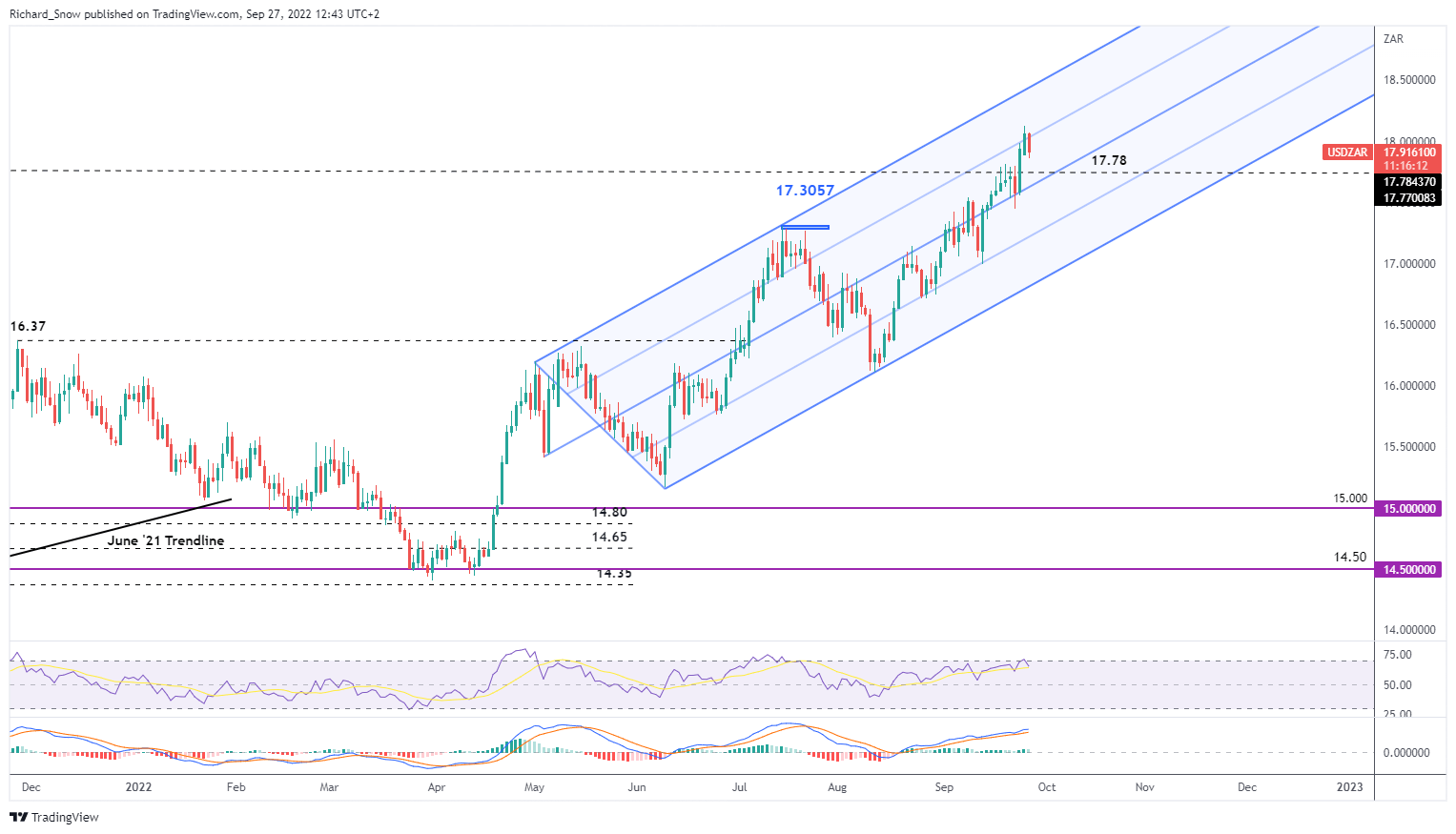 Mexico instituted the first of its 10 rate hikes all the way back in June last year in an attempt to suppress greater-than-anticipated inflationary pressures and forecasts. The peso has weakened against the dollar at times this year but has recovered to outperform the high-flying USD in 2022 thus far. The pair has given back ground recently and approaches the new year level of 20.50. 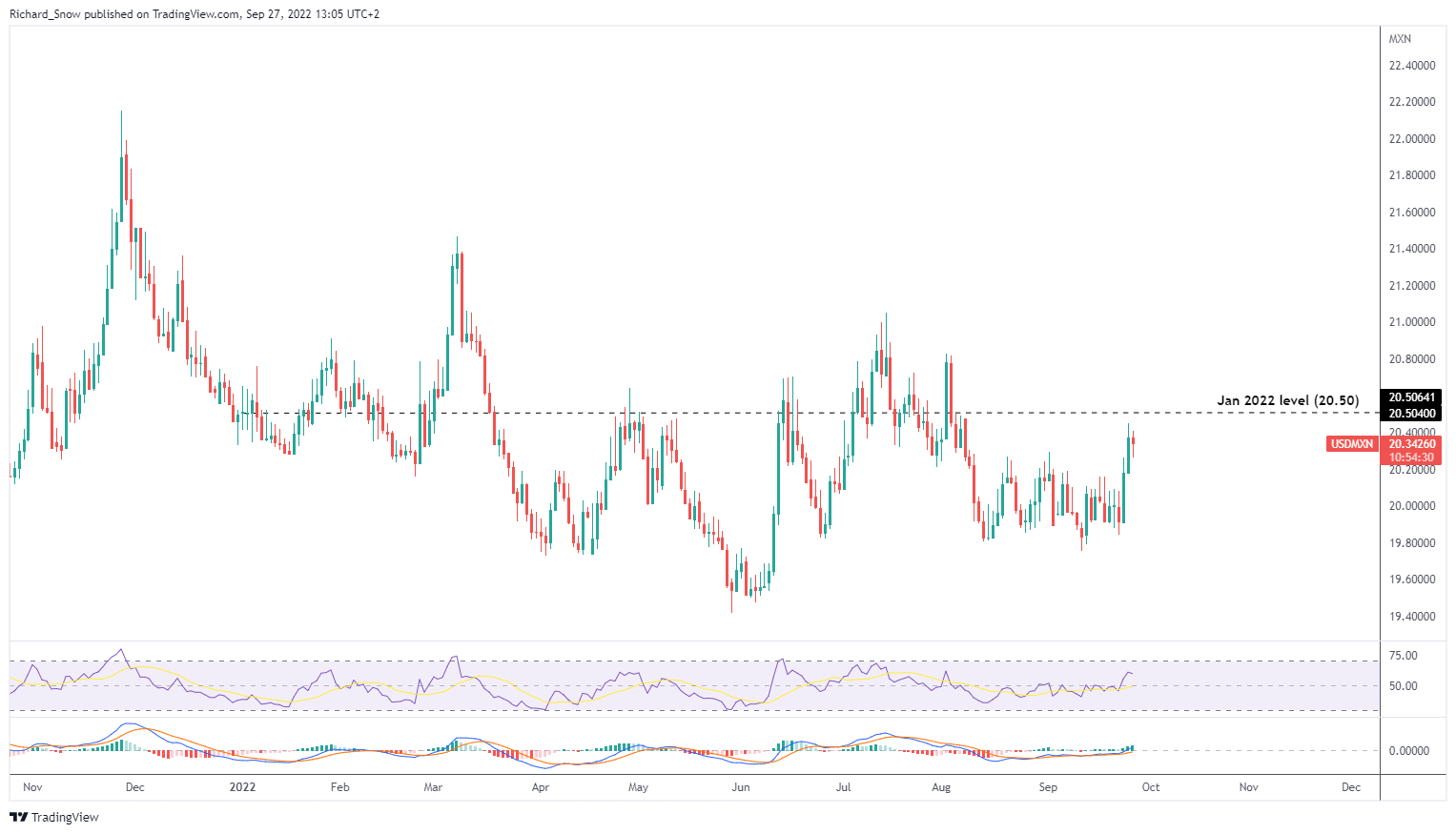 The Brazilian Real, like the peso, has outperformed the dollar but has done so for the majority of 2022 thus far. Last week, the Central Bank of Brazil kept rates on hold after the August inflation print dropped from 10.07% to 8.73%, the first return to single figures in a year. In a similar fashion to the peso, the real has depreciated against the dollar and the pair approaches the 3rd of January level of 5.57. 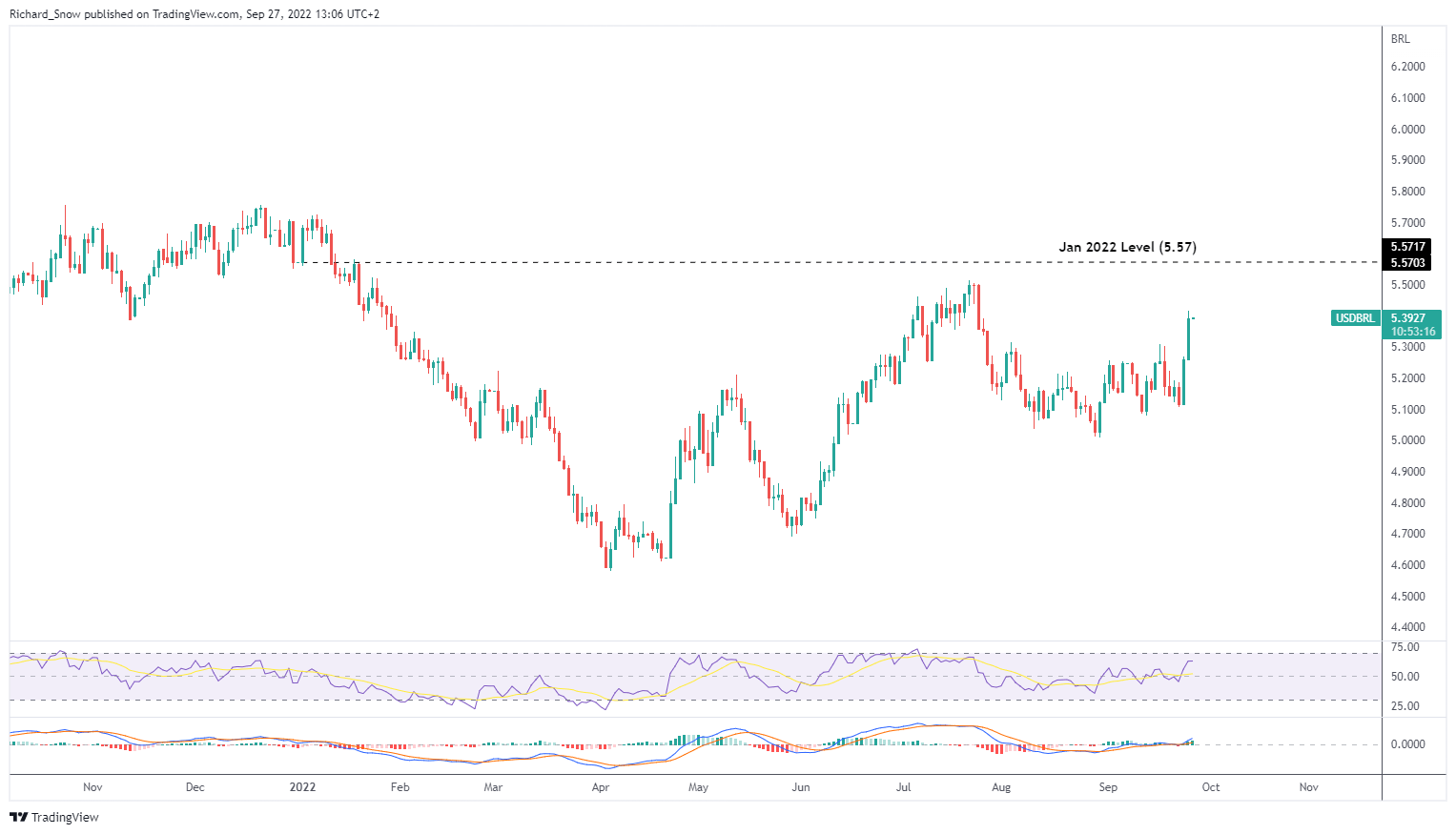