The State of the Economy

After a record resurgence out of the depths of the coronavirus pandemic, the US economy has been struggling in recent months. The 2Q’22 US GDP report showed the economy contracted by -0.9% annualized, marking the second consecutive quarter of contraction. Recession or otherwise, the fact of the matter that the US economy is slowing down, much to the concern of voters.

The state of the US economy is the top concern among voters in the 2022 midterm elections, at 40% of respondents to a recent Gallup poll from June 2022: 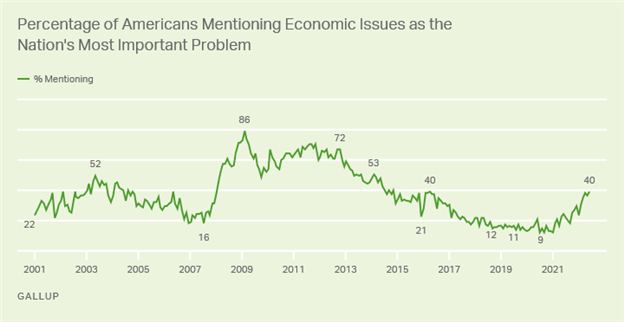 Embedded within those concerns about the US economy are worries about the rising cost of living. Multi-decade highs in US inflation rates are eroding Americans’ living standards, from higher rents to more expensive grocery bills to record high prices at the gas pump. Americans have become more concerned with inflation and the US economy as 2022 has progressed: 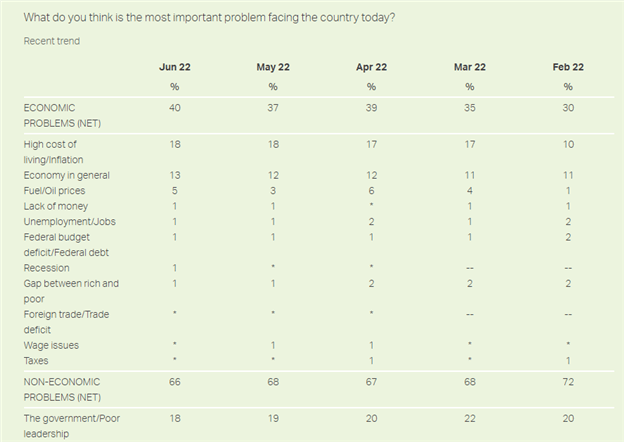 It is not just the state of the US economy that is bothering American voters: the top non-economic concern among voters is “the government/poor leadership.” US President Joe Biden’s popularity is at its lowest level of his term, threatening to weigh down other Democrats on the ballot – from Governors to Senators to Congresspeople.

History is Not Kind to Incumbents

The fact that US President Biden has some of the worst popularity ratings in presidential history – worse than former Presidents Donald Trump and Barack Obama at this point of their terms – is a major problem for Democrats in the Senate and Congress ahead of what is a historically difficult election cycle for an incumbent’s party.

On average, in the first midterm election of a president’s first term, the president’s party loses 26 seats in Congress. Democrats have a five-seat advantage in Congress, which means history coupled with US President Biden’s sagging popularity point to Republicans taking back control of the House of Representatives this fall. A slightly more favorable electoral map favors Democrats retaining control of the Senate, but as of August 8, the 2022 FiveThirtyEight Election Forecast gives Republicans an 80% chance of taking control of the House: 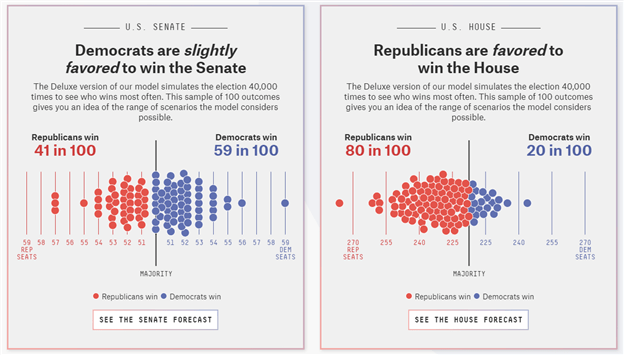 The Tides Can Turn

The 2022 US midterms are pointing to a divided government, the return of gridlock to Washington, D.C. that defined most of former US President Obama’s two terms and the second half of former US President Trump’s sole term. A string of recent successes – The PACT Act, The CHIPS Act, The Inflation Reduction Act, and bipartisan gun reform – may help US President Biden recovery some of his popularity, which may limit how much power Republicans can gain in the midterm elections.

But if recent polls are accurate, the single most important thing that will change the calculus of the 2022 US midterm elections will be inflation, and specifically, gas prices. Gas prices have been falling for several weeks now, with the US national average dipping to $3.99 per gallon by early August, according to GasBuddy: 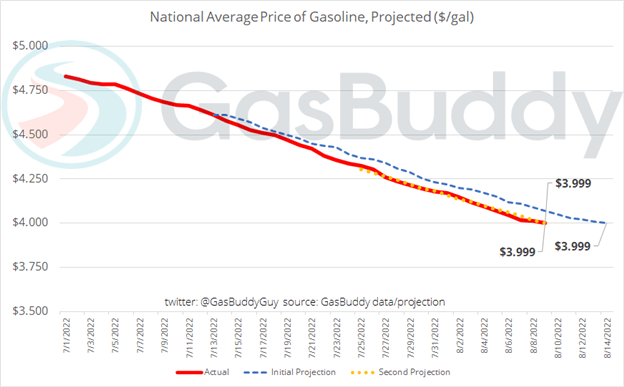 Unless gas prices drop further and US inflation rates pullback sharply in the coming weeks, odds are that Democrats lose control of at least the House of Representatives to Republicans, bringing about a divided Congress and gridlock back to Washington, D.C. This scenario will have profound implications for both US fiscal and monetary policy over the coming years, directly impacting the US Dollar, US equities, US Treasuries, gold prices, oil prices, and cryptocurrencies.