EURUSD extends the daily upside to the 0.9810/15 band, or daily highs, in the wake of another solid report from US Nonfarm Payrolls on Friday.

EURUSD briefly revisited the mid-0.9700s soon after Nonfarm Payrolls showed the US economy added 261K jobs during October, surpassing initial estimates for a gain of 200K jobs. The September reading was revised up to 315K (from 263K). 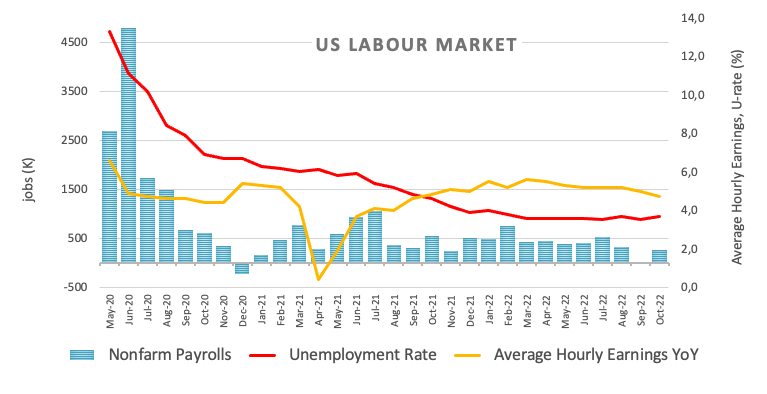 Despite the strong Payrolls keep supporting the case for the continuation of the tightening cycle by the Federal Reserve, the greenback remains on the defensive, while US yields extend their march north.

What to look for around EUR

EURUSD manages to regain some poise – and the 0.9800 mark – despite the stronger-than-expected Payrolls for the month of October.

In the meantime, price action around the European currency is expected to closely follow dollar dynamics, geopolitical concerns and the Fed-ECB divergence. The recent decision by the Fed to hike rates and the likelihood of a tighter-for-longer stance now emerges as the main headwind for a sustainable recovery in the pair (if it was any at all).

Furthermore, the increasing speculation of a potential recession in the region – which looks propped up by dwindling sentiment gauges as well as an incipient slowdown in some fundamentals – adds to the fragile sentiment around the euro in the longer run.

Eminent issues on the back boiler: Continuation of the ECB hiking cycle vs. increasing recession risks. Impact of the war in Ukraine and the persistent energy crunch on the region’s growth prospects and inflation outlook.