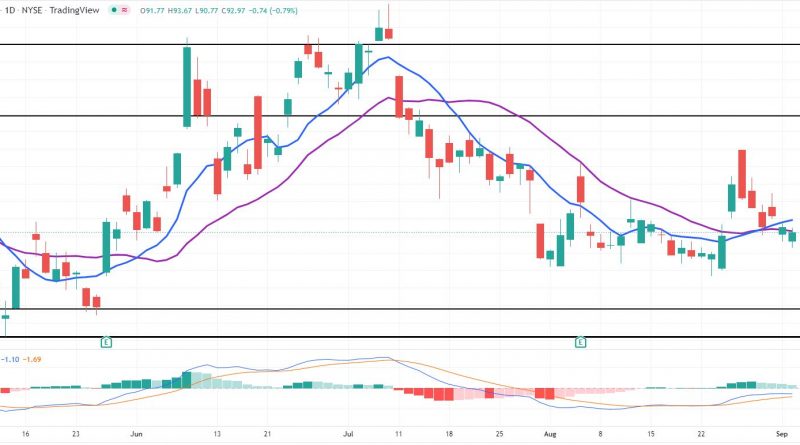 Alibaba (BABA) stock has begun to reclaim ground in Friday’s late morning trade. In the first hour, BABA sold off more than 3.1% but is now trading at the time of writing down 0.6% at $93.18. Shares of the e-commerce leader in China lost 1.8% to close at $93.71 on Thursday. This was much better than some of its peers as Chinese stocks have been discounted since the government announced a covid lockdown in the major industrial city of Chengdu.

Alibaba has its operations dispersed all over China, so it may be less affected by a lockdown than some other companies. Additionally, e-commerce sales have generally spiked during lockdown scenarios in the past.

This latest weakness in BABA shares is unusual since two long overhanging issues have become more or less resolved in the past month. First, SoftBank said it would sell half of its stake in Alibaba to shore up capital after losing badly in this year’s tech sell-off. That news on August 11 led the stock to gain as investors put this expected piece of news behind them.

Second, worries over a possible delisting of its US shares has also just been brushed aside. The SEC’s Public Company Accounting Oversight Board (PCAOB) has been scheduled to review Alibaba‘s internal audits beginning in mid-September. Without being given access to these public company audits, the SEC said earlier in the summer that it would have to remove hundreds of Chinese stocks from US exchanges. Now that this weight has been lifted through a preliminary deal with Chinese regulators, the markets have expected BABA shares to begin a reversal back toward $300 when its regulatory issues began.

The PCAOB has sole discretion to select firms at will for audit reviews and issue fines without input from Chinese authorities, which is a first in the nations’ relationship.

BABA stock still faces most of the same support and resistance levels. The 9-day moving average has recently overtaken the 21-day moving average, so despite the recent sell-off, it seems a particular segment of investors remains enthused.

A bullish target for Alibaba share price is the August 26 range high at $104.85. If that can be taken out, then the year-long $109.76 level is the next in line. After that, the $120 level that has long provided serious resistance stands in the way. On the downside, $82 and $78 remain two sites available for support. Slight support can also be found for around $88.

The author owns shares of BABA.