AUD/USD trades to a fresh weekly low (0.6991) as it gives back the advance following the Reserve Bank of Australia (RBA) Minutes, and the exchange rate appears to be reversing course ahead of the 200-Day SMA (0.7146) as it carves a series of lower highs and lows.

AUD/USD struggles to retain the advance from the monthly low even as the RBA plans to “take further steps in the process of normalising monetary conditions,” and the Australian Dollar may face headwinds ahead of the next meeting on September 6 as the central bank insists that “the size and timing of future interest rate increases will be guided by the incoming data.”

The comments suggest the RBA will adjust its approach as Governor Philip Lowe and Co. strive to keep “the economy on an even keel,” but the update to Australia’s Employment report may push the central bank to deliver another 50bp rate hike as the economy is anticipated to add 25.0K jobs in July.

As a result, a further improvement in the labor market may prop up AUD/USD as it encourages Governor Lowe and Co. to retain the current path in normalizing monetary policy, but a dismal development may generate a bearish reaction in the Australian Dollar as it fuels speculation for a looming shift in RBA policy.

In turn, AUD/USD may continue to track the negative slope in the 200-Day SMA (0.7146) with the Federal Reserve on track to carry out a restrictive policy, and a further decline in the exchange rate may fuel the recent flip in retail sentiment like the behavior seen earlier this year. The IG Client Sentiment report shows 57.00% of traders are currently net-long AUD/USD, with the ratio of traders long to short standing at 1.33 to 1.

The number of traders net-long is 10.73% higher than yesterday and 2.70% higher from last week, while the number of traders net-short is 5.18% higher than yesterday and 16.78% lower from last week. The rise in net-long interest has fueled the flip in retail sentiment as 47.60% of traders were net-long AUD/USD last week, while the decline in net-short position comes as the exchange rate trades to a fresh weekly low (0.6991).

With that said, Australia’s Employment report may curb the recent decline in AUD/USD as the update is anticipated to show a further improvement in the labor market, but the exchange rate may continue to carve a series of lower highs and lows following the failed attempt to test the 200-Day SMA (0.7146). 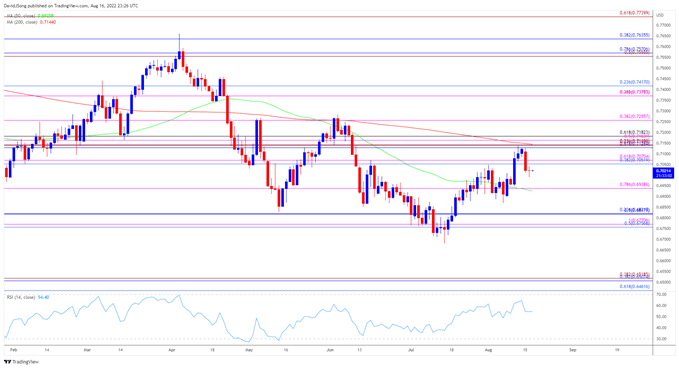