AUD/USD fails to defend the opening range for August as it slips to a fresh monthly low (0.6856), but the exchange rate may stage a rebound ahead of the update to the US Personal Consumption Expenditure (PCE) Price Index as it carves a bullish outside-day candle.

AUD/USD appeared to be mirroring the price action from June following the failed attempt to test the 200-Day SMA (0.7133), and the exchange rate may continue to track the negative slope in the moving average as the Federal Reserve prepares US households and businesses for a restrictive policy.

However, fresh data prints coming out of the US may prop up AUD/USD as the core PCE index, the Federal Reserve’s preferred gauge for inflation, is expected to narrow to 4.7% in July from 4.8% per annum the month prior, and signs of easing price pressures may encourage the Federal Open Market Committee (FOMC) to adjust its approach in combating inflation in an effort to foster a soft landing for the economy.

As a result, speculation for smaller Fed rate hikes may produce headwinds for the Greenback as the central bank acknowledges that “it likely would become appropriate at some point to slow the pace of policy rate increases,” and it remains to be seen if the FOMC will adjust the forward guidance at the next interest rate decision on September 21 as Chairman Jerome Powell and Co. are slated to update the Summary of Economic Projections (SEP).

Until then, AUD/USD may stage a larger rebound as evidence of slowing inflation curbs bets for another 75bp Fed rate hike, but the recent flip in retail sentiment looks poised to persist as the exchange rate fails to defend the opening range for August. 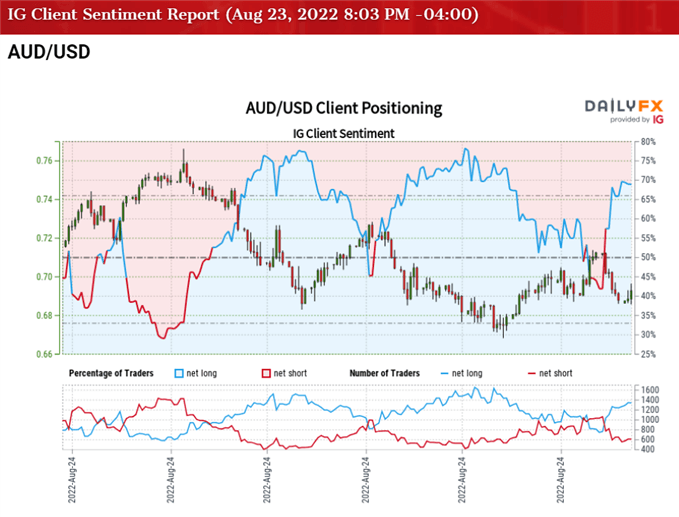 The IG Client Sentiment report shows 63.17% of traders are currently net-long AUD/USD, with the ratio of traders long to short standing at 1.72 to 1.

The number of traders net-long is 7.31% lower than yesterday and 7.97% higher from last week, while the number of traders net-short is 15.07% higher than yesterday and 16.57% lower from last week. The rise in net-long interest has fueled the crowding behavior as 57.00% of traders were net-long AUD/USD last week, while the decline in net-short position comes as the exchange rate bounces back a fresh monthly low (0.6856).

With that said, a slowdown in the US PCE index may generate a bullish reaction in AUD/USD as fuels speculation for smaller Fed rate hikes, but the exchange rate may continue to track the negative slope in the 200-Day SMA (0.7133) as it fails to defend the opening range for August. 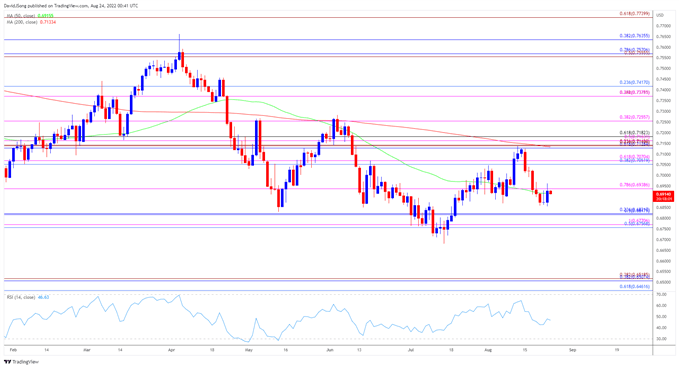