Amazon (AMZN) stock has dropped below the $100 level as forseen by Thursday night’s reckoning. Upon handing in quarterly results that showed sales missing Wall Street consensus by $370 million, Amazon promptly sold down more than 20% late Thursday. Friday’s market action, however, shows that folks are buying the dip, and AMZN shares are down a less drastic albeit still severe 10.1% at $99.70. The more significant point for traders is that Amazon stock has blown through the wide-ranging demand zone that has supported the share price all summer and had its origin in the pre-pandemic February 2020 period.

The market is less radical on Friday after a good night sleep and the realization that the Q4 guidance that was most significant to the market’s lack of confidence is not the end of the world. Managment said rather than the $155 billion in sales that Wall Street had been expecting for the holiday quarter, internal company forecasts showed the $140 billion to $148 billion range much more likely.

What this means to longtime observers is that last year’s 24% spike in revenue between Q3 and Q4 is now expected at a much more moderate 13.4% climb. Known for its hefty Christmas season sales, this would seem to show a much reduced holiday take and possibly even a longer-term slowdown in revenue growth.

Wall Street was not terribly excited about the sell-off in Amazon stock since it remains a top stock pick among most analyst shops. Goldman cut its price target from $176 to $165 but was sure to follow that up with its continued belief in the company’s growth prospects.

“Based on our work, we remain convinced in a multi-year operating income margin expansion story for Amazon on the back of improved eCommerce margins, less International losses & higher profit margin mix contribution from AWS and advertising,” Goldman said in a note accompanying the price target reappraisal.

Morgan Stanley cut its price target from $175 to $140 but retained its Outperform rating. 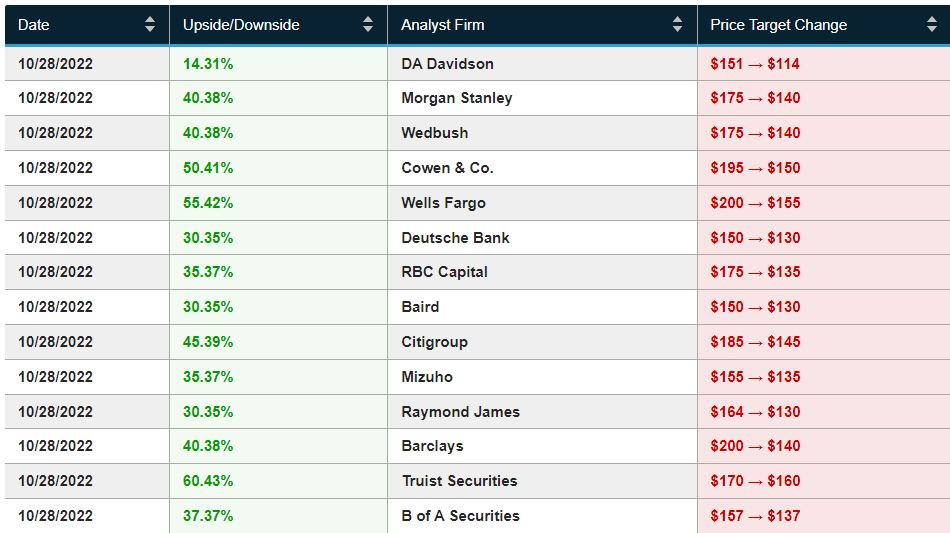 Now we get to the crux of the situation. Amazon has left the $101 to $109.50 range behind as it is now trading sub-$100. That demand zone lasted from May through July when AMZN shares were in the doldrums. Now it no longer has an pull it would seem. The major problem for bulls wishing to buy the dip is that the $90s do not seem to offer much in the way of historical support. There might be some support at $95, but that level only ever acted as resistance as recently as late 2019.

That makes the covid low from March 2020 at $81.30 a more likely bottom. Many other stocks have already reached the covid nadir, so it would not be all that unusual. It would require a further nearly 20% drop though. Another shoe might need to drop on the macro end of things to bring Amazon stock to this point. Above the $81.30 support also sits $86, which worked well in the fall of 2019 and might also become significant as the market heads into year-end.